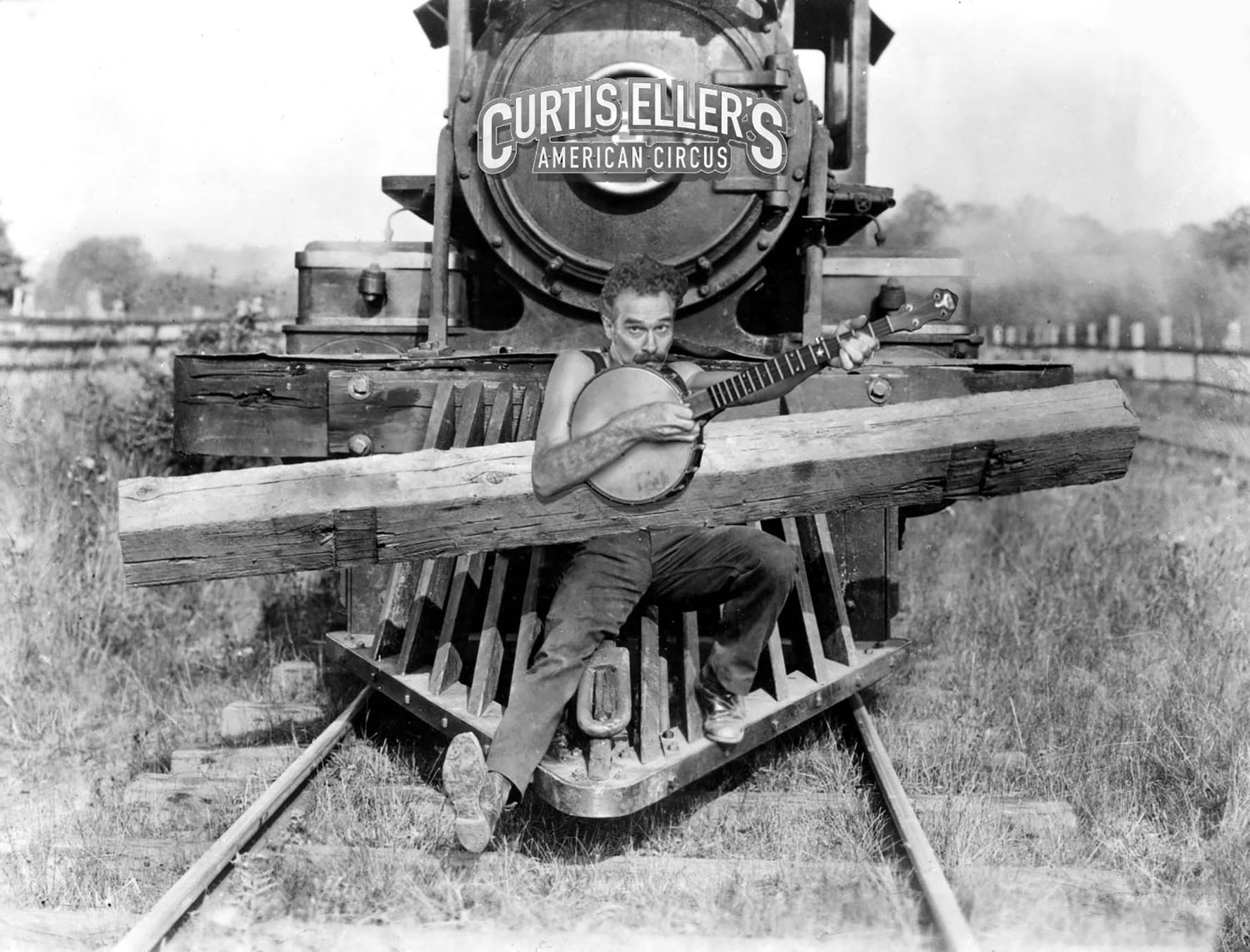 The Weird and the Wonderful!

Join Curtis Eller’s American Circus as they embark on an extended tour of the UK this summer. A prolific and accomplished songwriter, Eller has earned a devoted, international following based on his dynamic, often unhinged, performances. The veteran, banjo player and songwriter has assembled a brutish, inelegant rock & roll ensemble consisting of musicians from the US and England to bring his historically evocative compositions to vivid, cinematic life on the club and festival stages of Great Britain. Lace up your dancing shoes!

Curtis Eller’s Amercian Circus returns to The Adelphi on Wednesday 27th July. Always a big favourite in Hull this is an experience you should not miss! £9 on the door. £7 members. Doors 8.00pm

Curtis Eller is a banjo player, songwriter and rock & roll singer. After beginning his show business career at the age of seven as a juggler and acrobat, the Detroit native turned to the banjo and lit out for New York City where he rose to obscurity as “New York’s angriest yodeling banjo player“. Siting Buster Keaton, Abraham Lincoln and Elvis Presley as his primary musical influences, Eller became a staple of the beer halls, burlesque houses and underground theaters of the eastern seaboard. Fame proved elusive.

Having spent years toiling in the musical sweatshops of the industrial north, Eller uprooted his family and resettled in some faded, tobacco town in the North Carolina Piedmont to begin the arduous task of assembling a new version of his band, The American Circus. The latest version of the ensemble is a brutish and inelegant rock & roll outfit specializing in banjo music for funerals, gospel tunes for atheists and novelty dance fads for amputees. A lavish, Hollywood, dance sequence unfolding on the floor of a Chicago meatpacking plant in 1894.

The group’s latest phonographic recording, “How to Make It in Hollywood”, is a compact collection of glittery show tunes, sentimental tear-jerkers and rock & roll rave-ups whose lyrics are populated with two-bit prize fighters, Hollywood has-beens, lapsed gospel singers and forgotten pop stars. Eller relentlessly tours the US and Europe with an expanding and contracting cast of misfits. 2015 saw the band embark on an ambitious and successful, 40 date tour of the UK, Ireland and Hungary. 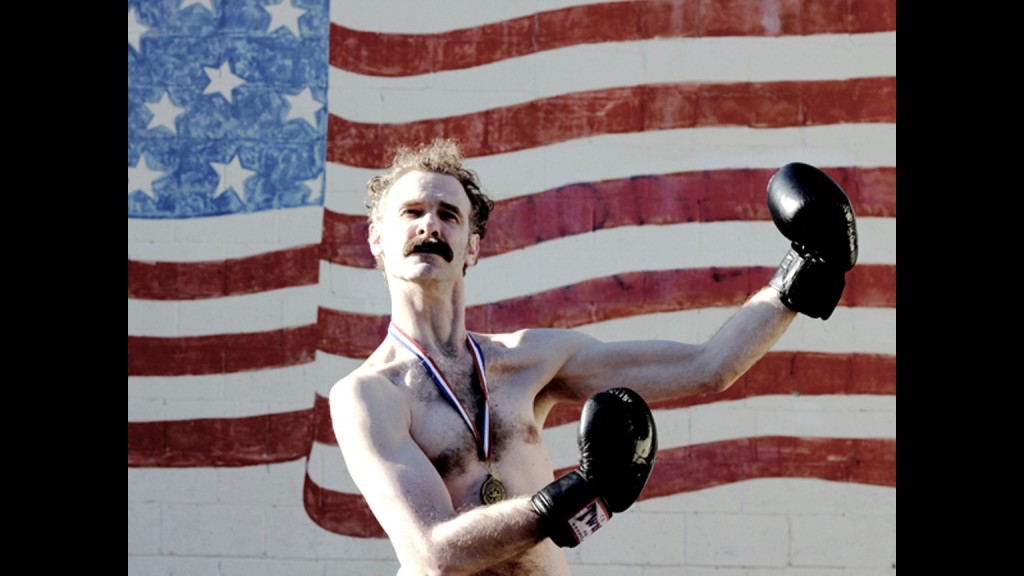 Album Review – How to Make It in Hollywood

Hard though it is, I try not to get hung up on genre, but by the end of this review I’m going to have to invent a new one and issue patent on behalf of Curtis Eller and his American Circus, because I can (almost) guarantee you won’t have heard anything like this before. What you have here is quality artistry with loose-limbed, plug-in and play theatrical improvisation that name checks a Sgt. Pepper’s menagerie of 19th and 20th century American celebrities and politicians on its way to completely bowling you over. I’d need another review to list out the names you’ll hear, but there’s no danger of the album becoming land-locked in 2014 as most of them are dead and gone.

​Eller doesn’t give much away about himself. Purposefully enigmatic, he once told American Songwriter ‘I consider myself primarily a rock and roll singer. I just happen to play the five-string banjo’, thus extending the enigma a little more. His website has a list of present band members and past alumni, then requests anyone who wants to join to send him an email. Eccentric? No. Different? Certainly. It suits the music well not to know too much about him, so I suggest you do your own research if you want to know more – the important thing here is what happens when the laser washes across the ones and zeroes. 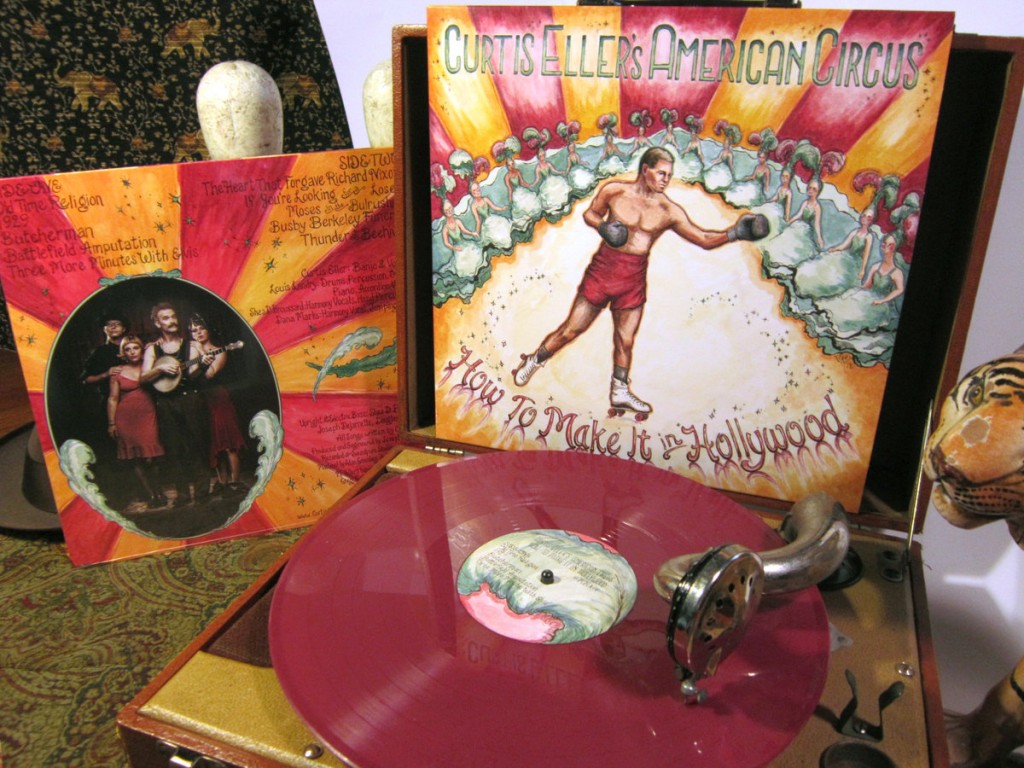 ​There are stabs of Hammond in several tracks, raw yet controlled fuzz guitar, back-porch harmonising, brutal tom tom work and staccato banjo picking. The album lurches from energetic arm-flailing contemporary ‘rawk’ to early 60s British Invasion pop to Boardwalk music hall to quasi-jazz and big-without-the-numbers big band. Normally I’d be wincing just reading this, but Eller and his crack Circus walk the tightrope of diversity without a pole and plenty enough chutzpah to pull off a somersault at the end. It’s drama all the way, yet never crosses the line into crisis.

​If I said the opener Old Time Religion sounds like a cross between Van Halen’s Big Bad Bill (Is Sweet William Now) and a track that remained on the editing suite floor during the Stones’ Let It Bleed sessions, with a sprinkling of Doors organ, you might begin to see my dilemma. It swings like a scythe in a hurricane. 1929 steps lightly across prohibition-littered America, not so much legislating for morality than requesting you ignore the stuffed shirts and Wall Street suicides and dance. Battlefield Amputation might have been The Cure circa Electric, all short sharp stabs of guitar riff and Booker T keys. Three More Minutes With Elvis is a gospel ballad underpinned with picked banjo notes and upright piano. The Heart That Forgave Richard Nixon (cute) pays homage to the Stones again in its backing vocals, the song a swampy trawl through Southern-fried rock n’ roll laced with humour and vitriol aplenty.

​Eller’s voice is elastic and just the right side of off-kilter to compliment the rough edges behind it; he lives and breathes the words on each song and you hear every intake of air and burnished rasp, even down to some particularly strangled yodelling on the punchy double-bass driven Moses In The Bulrushes. I can imagine the comedy morbidity of Busby Berkeley Funeral two-thirds of the way through Bugsy, men in pin-stripes and spats twirling spud-guns and harmonising on Eller’s wishes for a Hollywood style burial.

In just under 40 minutes Eller and the Circus take your business class ticket to Glastonbury, rip it up, and replace it with steerage seats to voodoo-nights in New Orleans’ French Quarter. It’s a trip you should take. PAUL WOODGATE – FOLK RADIO UK