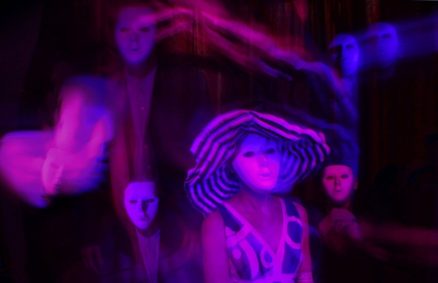 Pram are Sam Owen, Matt Eaton, Max Simpson and Harry Dawes, a work as a predominantly instrumental project with an increased interest in film and site-specific work. They once again signed to Domino Records to release new album ‘Across The Meridian’ last summer.

“This time they sound closer to a particularly strange Portishead, with a gentle, child-like vocal from Sam Owen recalling the weirder side of English Folk Music (eg The Wicker Man) and the late Trish Keenan from Broadcast.. I can’t begin to tell you how much I enjoy this album” – Soundblab

“one of the most original English ‘alternative’ bands of yesteryear.. variously classified as post-rock, prog-rock, lounge-core and ‘cinematic krautrock’, retro-minded pop with over nine albums and a fifteen year career. They perfected a wonderfully insular sound.. B-movie scores, vintage synthesizers – putting them in the same league as Stereolab and Broadcast” – Tiny Mixtapes

Following the release of their first album in 11 years, Across The Meridian, Pram now share their self-directed video for the track ‘Shadow in Twilight’. Watch the video now HERE.  The video premiered at this year’s Flatpack Film festival and features choreography from the professional dance troop, Danzia, whose faceless human figures align with the stars in an emotive piece of performing art that visually reflects the bitter feeling of loneliness.

Pram have roots in the post-punk late 80s, inspired by the likes of The Raincoats, The Slits, Can and the disparate soundscapes of late 20th century Birmingham, but Across the Meridian sees them weaving a gleeful path through the musical territory of film scores, 30s jazz, sun-drenched pop, and electronica. Owen’s haunting and wistful voice is set in a variety of soundworlds, sometimes appearing as a snatched fragment of the subconscious and dreamlike, at others crafting a story of longing or regret, drawing the listener through the mirror into Pram’s uncanny world. Over the years, the group’s repertoire has expanded to encompass extraordinary and disorientating shifts in composition, mood and texture, all of which help make Across The Meridian one of the most unique sounding albums of 2018.