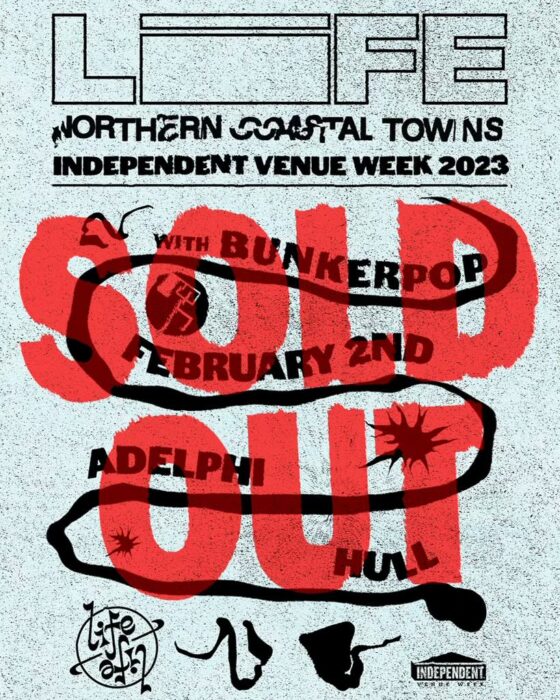 LIFE are anchored by their hometown; the geography, history and community has always been the inspiration behind their creativity and on their third LP, North East Coastal Town, the band pay homage to Hull and its folk. North East Coastal Town is mature; it finds the band at the height of their powers as they carve-up a wide-screen, brooding body of work that is drenched in a sense of belonging and reflection but still impressively maintains their trademark swagger and ear for pop sensibilities and guitar hooks.

“Hull and the surrounding area runs through our DNA and has shaped us, weathered us, empowered us, embraced us and made us feel accepted.

North East Coastal Town is our love letter to the city. The album is an ode to kinship and relationship with its musical and lyrical spine picking out themes of love, desire, beauty, horror, chaos, pride and most importantly the sense of belonging.

Upon writing and recording this album it was important to us that this sense of belonging was also reflected in the album’s craft and therefore we used locally based studios, equipment, gear, and the community around us to establish what it means to belong in a North East Coastal Town.”

When the pandemic gripped the world in March 2020, LIFE were in the midst of promoting their acclaimed second album – A Picture Of Good Health (Sept 2019); they had just completed an arena support tour with Kaiser Chiefs in the UK, a triumphant main stage appearance at Rockaway Beach and flown to New York for New Colossus Festival ahead of a packed SXSW and a US tour with IDLES. They scrambled home on the last plane back from New York on 17th March.

The album was BBC 6 Music’s Album Of The Day, BBC Radio 1’s Album Of The Weekend and was one of BBC 6Music’s Albums of The Year; all four singles from the album were play-listed at 6Music, and the band were nominated for two AIM Awards 2020 – Best Live Act and Best (Difficult) Second Album and they played major UK festivals including Glastonbury, Latitude, Reading Festival and many more.

They began rebuilding with ‘Friends Without Names’ – the shapeshifting first glimpse from the album – which was added to the A-List at BBC 6Music, and was recorded in the dead of night and hums with a dark, brooding and passionate atmosphere.

“Friends Without Names is the anchor and blueprint for our next record. In a remote part of Eastern England, close to the river Humber, we performed this track as if we were in trance; vibrating in a constant musical crescendo. Our aim was to push ourselves and harness differing time zones whilst giving in to the moments of beauty, horror, love and chaos depicted by the song’s lyrics.” (Mez Green, vocals)