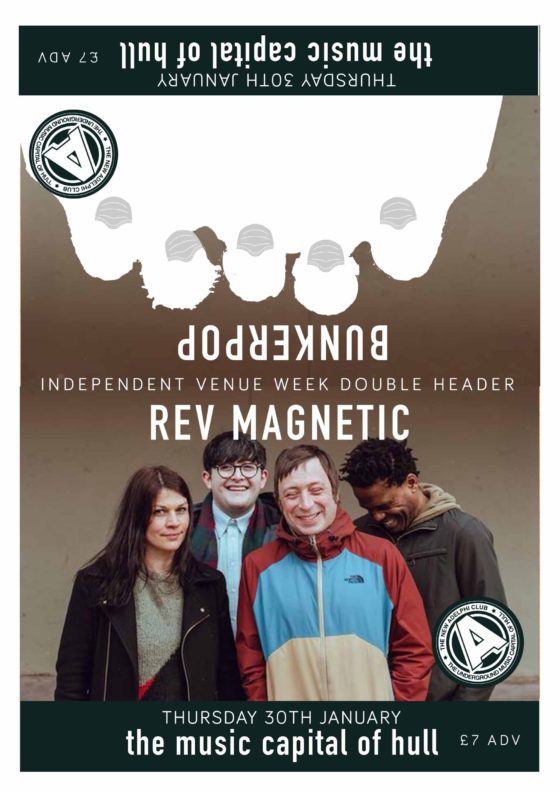 Listen up Mogwai fans, we have Luke Sutherland’s Rev Magnetic coming to Hull for a special show.
Put your day on hold and drown in the ecstatic cacophony.

Rev Magnetic play The Adelphi with Bunkerpop + Dive on Thursday 30th January. £7 / £5 Members
Advance tickets on the foot of this page.

“Whilst Sutherland may be best known to many through regular cameos with Mogwai, he has been quietly treading his own singular narrative over the past three decades. From Long Fin Killie’s whispered art-rock, to Bows’ blissful trip-hop, to Music AM’s erudite glitch-pop, Sutherland’s shape-shifting nous and immaculate taste make it somewhat baffling we aren’t shouting about him more often. Rev Magnetic’s Versus Universe, loosely telling the story of a Congolese woman whose parents disappeared in space, is Sutherland’s first new music in thirteen years, and it is loud: a maximalist, stylistically-kaleidoscopic shoegaze album, leavened with trap hi-hats, 808s, vocoder, found sound, violins and trumpets.”
The Quietus

REV MAGNETIC
“While touring the world as guest multi-instrumentalist with Mogwai, Luke Sutherland (Long Fin Killie, Bows, Music A.M.) used the downtime to sketch a bunch of songs. Once he got home, he wrote a handful more and recorded them with the help of a few friends at his cottage on the edge of the Scottish Highlands. The result was an album’s worth of material with references ranging from My Bloody Valentine to Teebs, Lemmy-era Hawkwind to ABBA, Vaughan Williams to Boulez.

“Keen to translate the radiant chaos of the recordings into a live setting, Luke put together Rev Magnetic, featuring Audrey Bizouerne (Gift Horse), Sam Leighton (Live w/ Prides, St MARTiiNS) and Gregor Emond who played with Luke in a band called Hynd, way back before the birth of the internet. Combining elements of dream pop, shoegaze, R&B, and post rock, their first single, Like No Girl That Ever Was/Don’t Let Joy Destroy You is the sound of summer at full pelt.”

BUNKERPOP
An experimental mash of energy, titivating instrumental and electronic sound.  Hailing from Hull, Bunkerpop are influenced by groups as Neu and Talking Heads. Their live show combines these musical charms with the excitement and visual stimuli of a Billy Graham, PFunk or a Flaming Lips concert.  A band for the people, cult like worship is encouraged!

DIVE
A product of the 9 Volt music project this local band are making their debut at the Adelphi. Get there early.