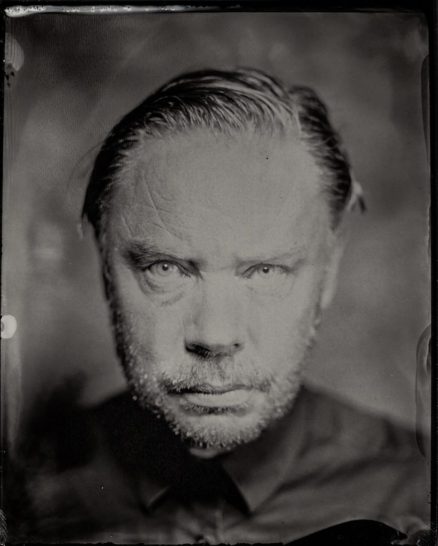 Part wandering minstrel, part travelling salesman, in one hand Delaney Davidson holds a small brown suitcase; in the other his guitar. One foot on the stage and one in the road.

Fresh from his sold out tour of New Zealand with Barry Saunders, organised to mark their recent joint release, Delaney’s dropping in to England for a very brief visit before heading to mainland Europe – don’t miss this chance to see him while he’s here!

One of the most distinctive figures in the NZ musical landscape is Delaney Davidson. Over a series of albums and compelling live performances he has presented his often jarring yet beautiful songs like some strange spook outlaw phantom, more at home walking through the pines at midnight under a full moon.

Well known for his hypnotic and original One man and his Ghost Orchestra show, enigmatic multi-instrumentalist Delaney Davidson both defines and commands his own unique realm in the shadowy musical world some call ‘Country-Noir’ or ‘Gothic Americana’.

His inspirations range from Hank Williams and Howlin’ Wolf to The Birthday Party, from Johnny Cash through Suicide to Buster Keaton. Reveling in the darker side of things, Davidson’s lyrical content dredges up classic murder ballads, songs with a deep insight into the human condition, and hypnotic trance takes on old blues classics. All liberally laced with an abiding sympathy for human quirks, failure, foibles and triumphs. His rumpled stage persona combines an unconventional and unforgettable voice with a wry and twisted sense of humor.

Support comes from Sarah Shiels. An authentic musician with rich blues vocals, over the past 5 years Sarah Shiels has been making a name for herself, gigging extensively across the UK and Internationally, with a variety of bands including Ming City Rockers and The Black Delta Movement as well as her solo work.

“It turns out Sarah Shiels has a voice like honey poured over diamonds.” – FolkBlues