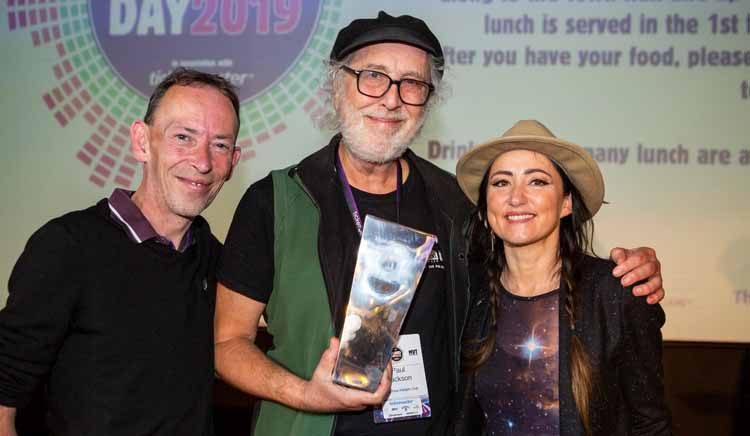 Music Venue Trust is honoured and delighted to announce that the winner of the 2019 Outstanding Achievement and Contribution to Grassroots Music Venues Award is Paul Jackson of The New Adelphi Club, Hull.

Paul has long been acknowledged as an inspirational figure by other venue owners and operators, so officially marking this seemed like the natural thing to do at Venues Day 2019. On the opening panel, hosted by MVT Patron Steve Lamacq, Paul was interviewed along with representatives of 4 other notable venues (Le Pub, The Green Door Store, Sneaky Pete’s, Night & Day Cafe) in Tales from the Frontline. The session culminated in Steve surprising Paul with the award, brought on stage and presented by KT Tunstall, also a patron of MVT, who had welcomed delegates to Venues Day.

Members of the Music Venues Alliance nominated potential recipients of the Outstanding Achievement Award and 2018 winner Steve Lamacq made the final choice. Remembering his own award and what it meant to him, Steve paid tribute to Paul’s dedication saying:

“I was so surprised to win this award last year I completely forgot to say how thankful I was. It really meant a great deal to me, being recognised by a sector I love, and it sits in pride of place on my mantelpiece. This year’s award is going to someone who has a singular vision allied to a strong sense of community, a true maverick who inspires everyone in the sector and has been doing so for 35 years. The New Adelphi Club in Hull exists as a beacon of independent music and art because of the dogged determination of one man and that man is Paul Jackson”

“On the 1st of October I completed a 35 year stretch at the helm of my strange but wonderful music venue which has the distinction of looking like a derelict building, both outside and in. Though I have endured numerous periods of being thrown against the wall by officials, I have genuinely loved my work. As somebody who has always resisted doing things by the book, the word ‘independent’ is important to me. I see my work as being a crusade against mediocrity in music.”

“Small, Grassroots Music Venues are essential to the health of the contemporary music scene in the U.K. Without this network, new artists have no opportunity to cut their teeth and essentially train for the bigger stages which provide the U.K. with a phenomenal global musical reputation as well as providing a significant financial boost to the overall economy.” KT Tunstall

“I would like to dedicate my award to the wonderful community that surrounds The Adelphi. To all small independent music venues with the hope for a future in which the rewards of running them will by far outweigh the many difficulties. To all the music fans working in the music industry. And last but not least to my mum Joan, (not forgetting my late dad Alan) who is currently in palliative care at the age 91 suffering from advanced dementia. My mums DNA runs through The Adelphi, as it runs through my city. In its’ time my family has contributed no less than £60,000.00 towards the survival of The Adelphi. My Mum also spent countless hours voluntarily ‘mucking out’ the Adelphi toilets, floors and furniture, not to mention my own filthy flat & dog walking duties.. She is the biggest star of my Adelphi”.

“Throughout my career I’ve been lucky enough to play in venues of all different shapes and sizes, from tiny clubs to massive stadiums all over the world. Without the grassroots clubs, pubs and music venues my career could have been very different. I support Music Venue Trust because artists need places to start out, develop and work on their craft and small venues have been the cornerstone for this. If we don’t support live music at this level then the future of music in general is in danger.” Sir Paul McCartney