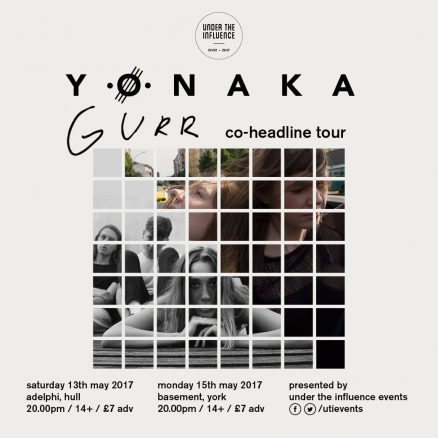 In the space of just one full single, Brighton quartet YONAKA have powered towards nationwide attention. The reaction after they uploaded their first track ‘Run’ to SoundCloud was phenomenal, as it was picked up for Radio 1 airplay without any promotion whatsoever. It was followed with their first full single ‘Ignorance’ which was released on Phil Taggart’s Hometown Records and continued to amplify the growing acclaim that has flowed their way. Shows alongside Drenge, Killing Joke and Demob Happy, as well as festivals including Radio 1’s Big Weekend and Truck also helped to spread their gospel.

YONAKA’s sound is one that sprawls ambitiously across music’s eclectic history: there’s exhilaratingly garage-rock exuberance; the thunderous loud/quiet/loud dynamics of Nirvana; heavy duty rhythms inspired by hip-hop; and soaring hooks that recall the joyous pop of The Marvellettes and the sinister storytelling of The Shangri-Las. As DIY concluded: “They’re a fascinating conundrum, clashing soul with all-out hedonism like Alabama Shakes on a rampage.”

Standing centre-stage is vocalist Theresa Jarvis who switches confidently between beguiling soul and an intense, anguished howl. A tumultuous whirlwind of energy, her stage presence offers YONAKA a bewitching focal point that sets them apart from the pack.

When two best friends start a band, songs get filled with inside jokes. In My Head takes the listener to a journey of Andreya Casablanca and Laura Lee’s friendship, their life, and a step further into the world of GURR.

Having met in an American Studies class in Berlin, and after spending time in US together, the US West coast sound was an obvious influence on their music, but Andreya and Laura draw from a wide set of pop culture references and personal experiences for their debut album. How to deal with one’s own ignorance (first single release ‘Moby Dick’), let yourself go and have nights that turn into mornings (‘Breathless’), or deal with the loss of love through someone else’s perspective (‘Yosemite’). Instead of telling stories of how it was, the two friends want to create a world of characters, stories and feelings everyone can relate to – and everyone can tell in their head for themselves.

‘First Wave Gurrlcore’ they call their own genre, always with a slight and acknowledging nod to riot girl culture and yet stressing that they want to invent their own style – they pair straight-forward garage rock tunes with more psychedelic and wave elements on their debut album. “We didn’t start making music because of Kathleen Hanna,” explains singer Andreya Casablanca. “Musically we were more influenced by bands like Gun Club, Echo & the Bunnymen, the B52s or classics like the Ramones and Beatles.”