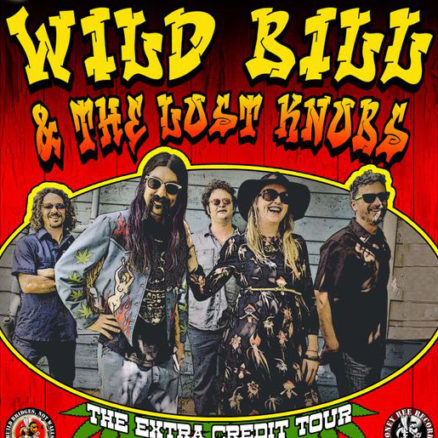 Raunchy, rough-and-tumble outsider country music from Wild Bill and the Lost Knobs, with support from Elwhaeko – unique, soulful and dark Indie Acoustic Pop from the East Coast, inspired by artists like Bright Eyes, Fleet Foxes and Nick Cave – and beachcomber grunge from Tom Skelly and the Cool Seas.

Wild Bill and the Lost Knobs are a high-energy, roots-rock band from Austin, Texas. The international touring band is heavily influenced by music from Austin’s trademark 70s era, the band combines blues and country with other progressive styles to satisfy the dancers, the rockers, the rollers, and anyone else who hears them play. They look and sound like they were sent straight out of a time machine from the Armadillo World Headquarters in 1978, and quite possibly smell like it too. The band formed in a slow cooker starting with a singer songwriter show in a coffee shop. That eventually resulted in the band playing their own “Highbilly Happy Hour” residency at the world famous Antone’s.

They released their debut album, The Show, in 2014, and produced three videos to promote it. The video for “The Show” swept top honors over some of Austin’s biggest names at the Austin Music Video Race winning for best art direction, best concept, best use of song, and best music video.

“At a Wild Bill show, you, as the audience, experience an all-out blast of demented good times, sordid tales with intriguing finales, extra flourishes and personal touches that only a tripped-out troubadour like Wild Bill can conjure. All that, and deviled eggs. You have to see it to believe it.” – Laurie Gallardo, KUT radio

“M.I.A. has sampled Bill. What did Bill do? He sampled her right back. He may look hillbilly, but he ain’t. Strap yourself into your seat when you come. Read the shirts and hear the words. T-Shirt ain’t supplied, but the wit is free. When Bill dances, we dances.” – AustinMusicWeekly.com