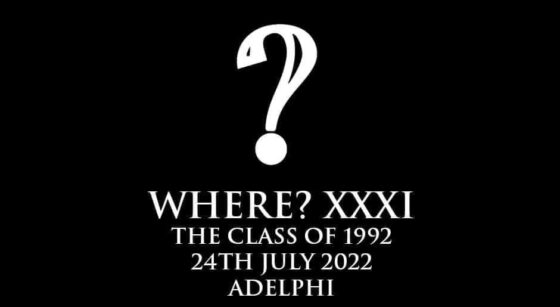 To celebrate the delayed 30th anniversary of Hull music magazine ‘Where?’ we have a night of musicians from the early nineties Hull music scene.
Acts are playing their old songs or musicians from the era performing sets with their current bands. There will also be a soundtrack of tunes from early nineties musicians Performing on the evening are…… The Oceaneers (Looking For Adam) Janus Stark ( First gig in 30 years) Loudhailer Electric Company (Planet Wilson/ Red Guitars) The Last Bastions of Bohemia (Brontes) The Part Time Popstars One or two special guests as well.
The event will start from around 8pm and it’s £5 online or on the door. This may be the last nineties reunion and follows in the footsteps of the legendary 25th anniversary gig of July 2016 when a dozen acts played for the first time in 20-25 years for Tim Joseph the editor of Where? magazine.
Where XXXI. Class of 1992 . T
89 De Grey Street, Kingston upon Hull, HU5 2SA
This website uses cookies to improve user experience. Please confirm that you accept the use of cookies. More information can be found in our cookies policy. Find out more.