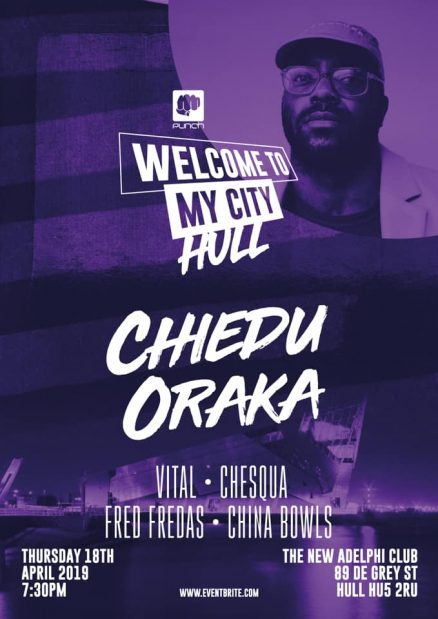 WELCOME TO MY CITY: Chiedu Oraka

This event is SOLD OUT in advance.

WELCOME TO MY CITY: Chiedu Oraka

Punch Records hit the road this April with their 3rd “Welcome To MY City” tour.

Known for their groundbreaking work with emerging artists and their ability to spot the next big thing, Punch have selected 5 emerging artists making waves in their local music scene and will visit each of their cities on tour, each event being headlined by the artists from that respective city.

Chiedu Oraka, is the sound of a new working-class Northern England. Raised in Hull on a diet of old school hip hop from Lauren Hill to Tupac, supplied by his older sister, the Hull native is cutting his own path. In a city often dominated by guitar music, Oraka offers a fresh alternative which has already attracted the attention of everyone from Vice and 1Xtra through to The Guardian and 6Music. With a DIY aesthetic and his own production team, the Yorkshire born artist has been cultivating and leading a hip hop revolution in his hometown whilst collaborating with other vibrant spirits in the city including punk band LIFE.

Finding two of his latest tracks featuring in Spotify’s prestigious Grime Shutdown playlist, with his recent release ‘Darcy’ achieving over 1 million streams on Spotify alone, support from Huw Stephens and Tom Robinson whilst supporting the likes of Stormzy, KRS One and Akala to name a few, this Northern Powerhouse is only just getting started.

Tickets. Advance Tickets – This event is SOLD OUT