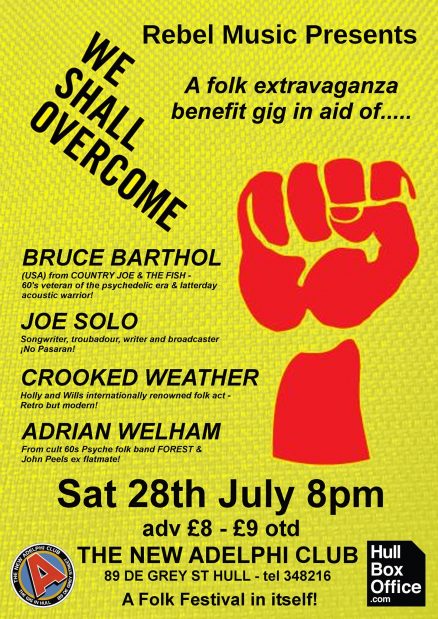 Rebel Music presents
A folk extravaganza benefit gig in aid of We Shall Overcome
WSO is a movement of musicians, artists, activists and community organisers who are angry about the human costs of austerity policies but who want to do something practical to help those affected.

A Folk Festival in an evening with 4 top acts. And all for a good cause. Country Joe and the Fish member Bruce Barthol , once 60s psychedelic warrior and for a long time acoustic troubador has played with Pete Seeger and at Monteray Festival 1967. Now returns to Hull to tell tales and sing songs from his very interesting life. Anyone in the line up could be a headliner, but next is Joe Solo, mainstay of the We Shall overcome organisation, well known travelling musician, songwriter, activist and all round good bloke. Like a British Woody Guthrie, except he doesn’t travel on old freight trains. Then Crooked Weather ( acoustic) Holly and Wills internationally touring wonderous folk outfit. very retro like a reigniting of the late 60’s folk revival, but modern. Great Eps etc. And special guest , Adrian Welham of 60s cult psyche folk outfit Forest. They had two classic LPs on the Harvest Label one in 1969 and one in 1970. They played the scene and were a John Peel fave. Many acts say they were a John Peel fave but Forests claim to this is stronger as he mentions them in his book and Adrian was Johns flatmate ! Adrian has recently started writing and performing again and is strating on a new musical journey. this is a great value folk festival in an evening so spread the word and get down to Newland Ave for a good cause.