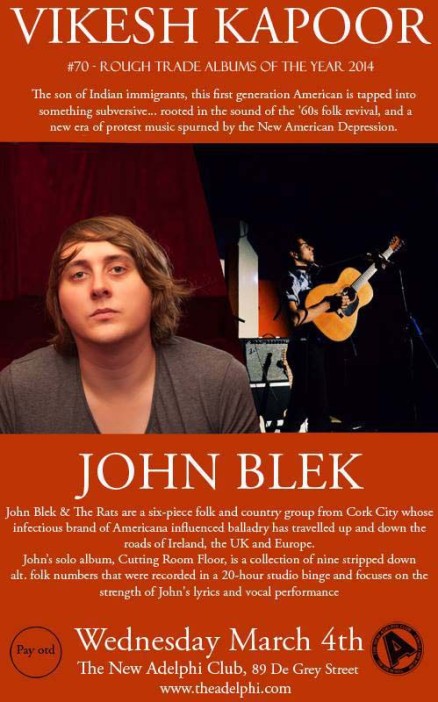 The son of Indian immigrants, this first generation American is tapped into something subversive. He is a remarkable observer of human life and a champion of the middle and lower class. The Ballad of Willy Robbins, Kapoor’s newest album (available via Mama Bird Recording Co.), was inspired by a newspaper article that told the tale of a blue collar worked that was hurt on the job and subsequently lost everything. The album is rooted in the sound of the ’60s folk revival, and a new era of protest music spurned by the New American Depression.

“An impressive debut.” ★★★★ THE GUARDIAN

John Blek and The Rats are a six-piece folk and country group from Cork City whose infectious brand of Americana influenced balladry has travelled up and down the roads of Ireland, the UK and Europe, kicking up the dust in the dark corners for the last few years.

John Blek & The Rats take inspiration from range of musical styles such as the outlaw country of Willie Nelson, the protest ballads of Woody Guthrie, the 100 mile-an-hour lyricism of Jack Keruoac and the melancholic country rock of Neil Young.

A Rats-less John Blek has released a solo album, Cutting Room Floor – a collection of nine stripped down alt. folk numbers that were recorded in a 20-hour studio binge. This solo endeavour began simply as a longing to document some songs that had fallen by the way side, but turned into a strong collection of live acoustic performances that needed to be shared. The process involved very little overdubs and focuses on the strength of John’s lyrics and vocal performance.