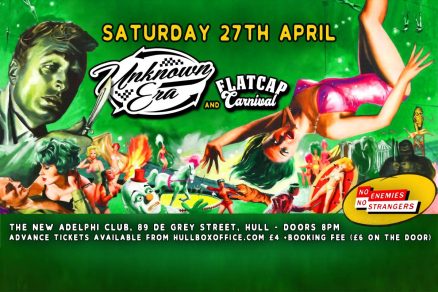 No Enemies No Strangers presents:

A bunch of misfits that defies categorisation. With 9 members’ worth of influences and inspirations (and with lead vocal duties shared amongst 4 of ’em) Unknown Era was always going to be an interesting project. It’s been a pleasure to watch them grow from their formation and early shows into the absolutely belting band they are today. After heading up from Nottingham for the first time to play main support on Counting Coins’ debut album launch a few years ago, they’ve been back on their own merit several times since, bringing their upbeat mix of hiphop, soul/funk, reggae, rock, DnB, Disco, and whatever else they fancy throwing in to the pot. It’s a wild ride, so buckle up.

with support from Flatcap Carnival

This York-based band boast a 3 piece brass section, describe their sound as a Latin-infused skanival, and cite The Cat Empire and Fat Freddy’s Drop amongst their influences. Plus their beard game is pretty strong. It’s their first time in Hull so arrive early and show them how we do it… Dancing shoes recommended, flatcaps optional.

Advance tickets – £4 (+booking fee) from www.hullboxoffice.com/event/unknown-era-flatcap-carnival
Pay on the door – £6