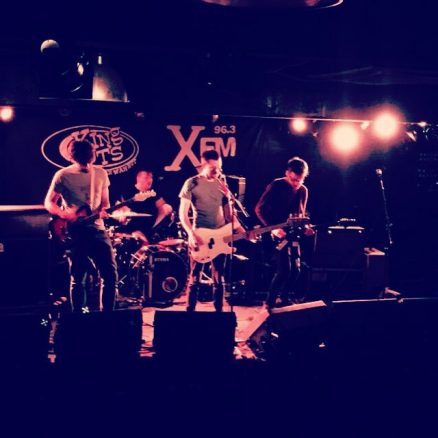 Having formed in 2016, they have appeared alongside Nothing and performed at Stag & Dagger Festival, as well as touring the UK with Adore/Repel. The debut release of a split 7″ single with Jutland Songs was released in August 2016 and will be followed by a debut album on February 24th, 2017.

Undo like it loud. Their songs drift and dive, scream and croon, playing about with tension and release. They are usually sad, sometimes stretching to melancholy. It’s all frantic drums and meandering guitars.

Undo recorded their debut album with Paul McInally at 45 a-side Studios and it was mastered by Joe Caithness of Subsequent Mastering. The album will be released on CD and digital, fulfilling childhood fantasies for the band.

The band believes there is a real spark of invention in what they have created, something that makes you want to listen on to see where this all leads. The band are still writing and evolving and developing the music they create, looking forward to the future.”

Adore//Repel are a 4 piece post-rock band from Wakefield, there unique and melodic songs build up from minimal haunts to ferocious burst of energy, the line up consists of twins james lee and danny favela brown on guitars, Bob Johnston on bass and Anthony waggstaff on drums. The bands instrumental sound comes with surprise vocal sections which they almost always sing together with passion and energy, the band have been together since early 2013 as there fan base grows with every show.