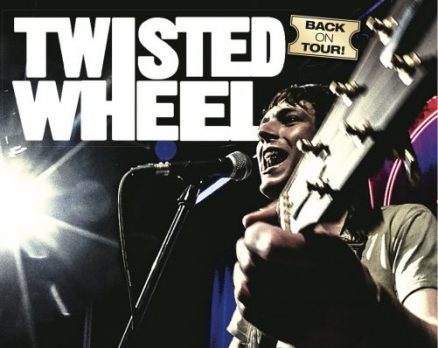 For Twisted Wheel, Snakes and Ladders is not just a board game, it’s a CV. Born in the backwaters of Oldham in 2007, the young band, fronted by the feral, precocious Jonny Brown, roared into the race of indie rock with such anthems as ‘You Stole The Sun’, ‘She’s a Weapon’ and ‘Lucy The Castle’. Their irrepressible energy and ability to deliver inspired rock’n’roll gained them the support slots with Oasis, Kasabian, Paul Weller, The Courteeners, The Happy Mondays and Ian Brown to name but a few, as well as sell-outs on their first UK and European tours.

Constant touring across the UK, Europe and Japan the UK (thanks to the Grass Route movement and the big festivals) led to a solid fanbase despite the dramatic trajectory of its frontman, Jonny Brown – or maybe because of it. Twisted Wheel has indeed rocked and rolled, been smashed up, fallen off the wagon, gone solo, kicked to the kerb – before finding its groove and getting back on it, full speed ahead.

Twisted Wheel – it may have been bad, bent and broken but it’s back, a band with integrity, fun and experienced authority.