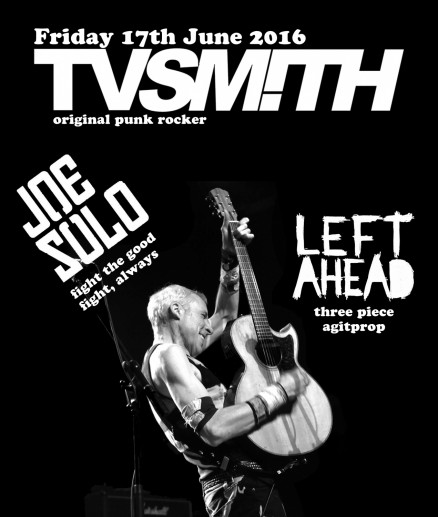 TV Smith found fame in 1977 fronting punk band The Adverts and making the seminal album “Crossing The Red Sea With The Adverts”. After the band split in ’79, he went on to form TV Smith’s Explorers and Cheap through the ‘80s. His solo album “March Of The Giants” in ’92 found a new army of followers.

TV Smith has never stopped gigging and releasing new material – check out his website to see his incredible schedule!

Expect to hear songs from the latest album “I Delete” as well as “Gary Gilmore’s Eyes” and “One Chord Wonders” from the ‘70s.

Joe Solo has been performing round here for years, building a reputation as a political songwriter. A founder of “We Shall Overcome” – a serious of gigs and cultural events in 2015, all around the country, opposing austerity and supporting those worst hit by the cuts. Looking forwards to “We Shall Overcome 2016” in the Autumn!

Left Ahead are a three piece punk/rock band from the murky depths of Hull; fuelled by anger at the current politics and state of society, they decided to make a racket about it and found that it’s cathartic to shout at people about stuff.