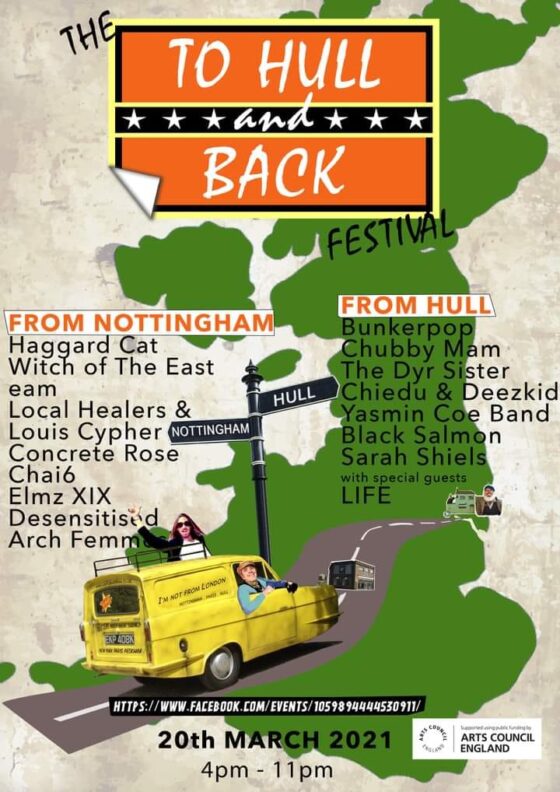 To Hull and Back – Live Streamed Festival

To Hull and Back – Live Streamed Festival – It’s free

To Hull and Back is an innovative response to the pandemic restrictions of the live sector that
aims to boost promising musical careers that may have stalled due to the lack of touring opportunities of the indie circuit of small independent music venues, a rite of passage
for upcoming acts looking to build their fanbases.

Conceived by Nottingham’s Fisher Gate Point partner Ian Gardiner (Offshoots/Fisher Gate Point)
and music promoter Will Robinson (I’m Not From London), To Hull and Back is being delivered in
collaboration with Hull’s iconic independent music venue and long-standing champion of new
artists, The Adelphi.

Among the diverse line up of acts are the Nottingham duo Haggard Cat, who
released their third album, Common Sense Holiday, via Earache Records to wide critical acclaim.
With their DIY ethic and propensity for pulling off memorable antics earning them a reputation
as a band that push boundaries, a recent stunt involved the two musicians holed up in a small
concrete box for 24-hours as a visual metaphor for how Brexit will impair British bands’ abilities
to tour Europe.

Special guests, punk band LIFE have already made a splash attracting the attention of BBC 6 Music’s
Steve Lamacq. Perhaps this sentence from the Hull band’s bio sums up why a project like To
Hull and Back is so vital. The band’s DIY ethos came partly out of necessity – and reflects their
geographical location in Hull, a geographically isolated, coastal city which resident poet Philip
Larkin once said was “a city in the world yet sufficiently on the edge of it to have a different
resonance”, and where things happen because people have to make them happen. On the cusp
of an exciting future, LIFE have toured in Europe and America, appeared with kindred spirits
Idles, Slaves and Nadine Shah, and made their Glastonbury debut.

Will Robinson said: “To Hull and Back builds on the work we’ve done over the last five years to
establish musical links between the cities that we feel share a DIY spirit. We had been putting
on nights in each city bringing bands from Nottingham to Hull and vice versa. Covid stopped
this happening but this project will help continue the momentum that had been building.”

Paul Sarel, GM at The New Adelphi, said: “As a musician as well, I know how tough it is for
bands and artists not able to play live gigs for so long. I hope this experience will be a valuable
chance for them to enjoy the feeling of playing for an audience again and ignite a spark of hope
for the future.”The livestream festival on 20 March will showcase the best of each city to a wider audience to
help artists reach music fans outside of their native cities. The curated line up features more
than 20 acts from ambient alt pop to heavy blues and hip hop.With live sets being played at Fisher Gate Point in Nottingham and The Adelphi in Hull, music
industry presenters in both cities will introduce the acts through the day, bringing them to the
attention of new audiences, interspersed with interviews and guides to each city’s music scene.
If Covid restrictions allow, there will also be an invited audience at both venues.

The audience will also be invited to interact with the presenters to talk about the acts they would most like to see on the festival bill in their own hometown. Some acts from Hull will secure a slot at I’m Not From London’s The Waterfront Festival in July (most likely next year) while the Nottingham winner will play at The New Adelphi’s Fast & Bulbous Festival in August.

For the audience, a competition to win a pair of tickets for each festival will run throughout the day.

To Hull and Back will be streamed on 20 March from 4pm and available to watch on various
platforms.To find out more and set a reminder, join this event and follow the following links! 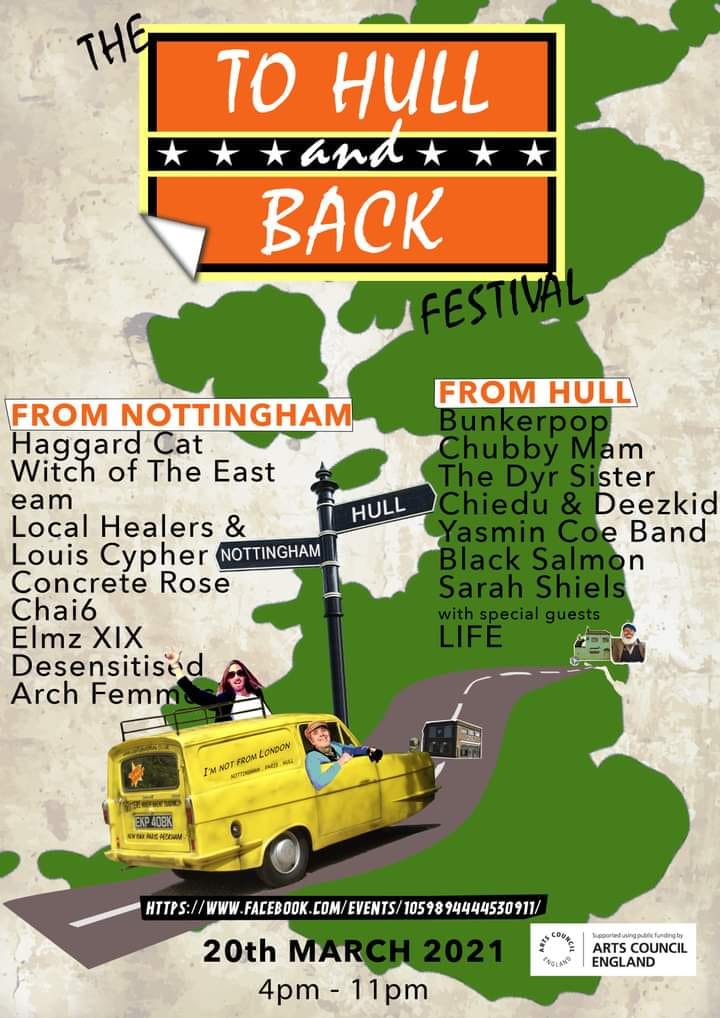