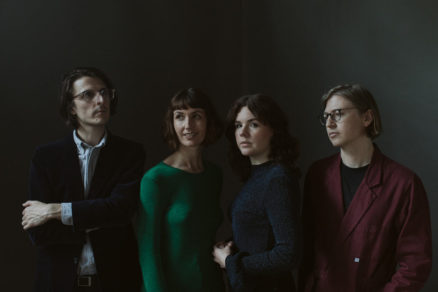 “…an album confident in its vulnerability and luxuriating in a bigger sound.” – Loud and Quiet 8/10

“The band’s 2014 album only took two weeks to record but its follow-up was pieced together over leisurely, incremental steps. It’s an approach that infuses Olympic Girls with a charming lightness, the airy melodies and dreamy acoustic guitars gently folding into each other.” – Q Magazine

“Her brilliantly underplayed vocals remain the same, but now they are contrasted with a slightly psychedelic sound on highlights such as How Much and the wisful, sighing Holograms.” – Sunday Times Culture

A rare blend of eloquent lyrical craft and explorative musicianship, the songs of Tiny Ruins have been treasured by crowds and critics for almost a decade. Traversing influences that cross genre and era, the artistry of Hollie Fullbrook and her band spans delicate folk, lustrous dream pop and ebullient psychedelia.

Born in Bristol and raised in West Auckland, Fullbrook’s debut LP Some Were Meant For Sea (2011) features her alone, and was quickly celebrated by radio playlists and blogs worldwide. The album’s clutch of “gorgeous vignettes” (BBC) put the artist on the map, and she took to the road from her home in New Zealand to tour extensively through the UK, Europe and North America – a passage repeated many times since.

Second album Brightly Painted One earned more accolades, championed by the New York Times, NPR and David Lynch, and winning Best Alternative Album at the New Zealand Music Awards in 2014. “An album of quiet, devastating beauty,” wrote Pop Matters. The album saw Fullbrook join forces with producer Tom Healy, whom, alongside long-time tourmates bassist Cass Basil and drummer Alex Freer, Fullbrook has worked and toured with ever since.
“…an album that both bruises the heart and lifts the soul…songwriting that demonstrates a novelist’s eye for detail.” — Uncut review of Brightly Painted One

While spanning continents, Tiny Ruins became a sought after collaborator. A New York recording session culminated in the EP Hurtling Through (2015) with indie-rock legend Hamish Kilgour (The Clean), while 2016 single Dream Wave was recorded and produced by award-winning cult filmmaker and musician David Lynch:
“A tranquil, pared-back track [with] a gradually rising sense of the macabre… very special indeed.” — The Line of Best Fit

Building on the sparse minimalism and mesmerising songwriting of earlier releases, third album Olympic Girls comprises a taut and agile quiver of songs, dancing with explorative instrumentation and a pop sensibility that springs with life.

“How much would you be willing to give?” Fullbrook asks point-blank in first single ‘How Much’, ahead of woozily discordant strings and a stomping neo-psychedelic rhythm. The lyric brims with imagery of supermarket breakdowns, lilos, snarks and silos while an anthemic guitar hook soars throughout. Not content to leave the song at a stable conclusion, a thumping ‘I am the Walrus’-esque bass outro propels the track boomerang-style back to a space of adroit experimentation.

“I’ve heard Olympic Girls, and I had to pick my jaw up off the floor”, wrote Grant Smithies. “Clustered around more introspective passages typical of confessional singer-songwriters are gnarlier phrases that give her work its buzzy voltage: arresting visual images, weird associations, daisy-chains of telling detail.”

A group renowned for their electric dynamic live on stage, Tiny Ruins have played stages in solo and varied group formations across countless cities and states with Sharon van Etten, Calexico, the Handsome Family and more.

Following the release of Olympic Girls on Feb 1st 2019, the band will be touring throughout the UK, Europe, Australia & NZ.

“Part of the charm of Olympic Girls lies in the layers of mystery in each song. Inspired by literature, science, nature and human experience, these mysteries lie waiting to be carefully unfolded…” God Is In the TV – 9/10

“An album confident in its vulnerability and luxuriating in a bigger sound.” Loud & Quiet Review of Olympic Girls – 8/10

“… songs that change sound and mood during their duration, never meandering and always captivating.” BUST Review of Olympic Girls – 5/5

“… a deeper listen to these eleven tracks exposes a breadth of influences that spans decades.” – The Wire Review of Olympic Girls

“She is always looking uneasily toward the next line, or moving toward mysticism. In sentimental contexts, she generates lines of wicked ambition.”— The New York Times