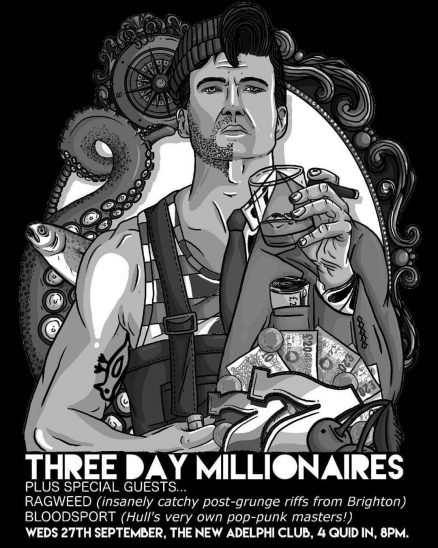 Ragweed (Insanely Catchy post-grunge riffs from Brighton)
When you think of a Brighton band, an image of laid back, easy listening summer music may spring to mind. Forget what you think you know. Comprising of three rag tag musicians, Ragweed are best described as punk riff, noise pop. But don’t go running away with the idea that this band is simply about making a messy racket. These boys know how to write a tune with expertly crafted lyrics, not to mention putting on one hell of a show in the process.

Hard work and dedication has paid off. Having played 8 self booked tours, they have shared the stage with some of the latest and up coming bands including: 68, The Xcerts, Demob Happy, Tiger Cub and Axis Of. 2016 was the perfect time to take a break and write new material; strengthening the current line up. This manifests itself in a rejuvenated, renewed, coherent line up and band as a whole. Now – in the build up to their debut single – Ragweed have set their feet firmly on the gas as they plough their way through whatever the hell is in their way.