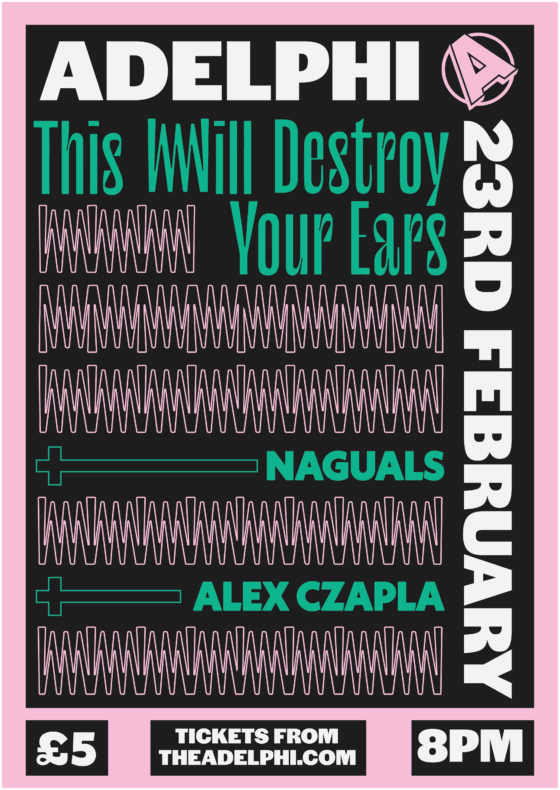 This Will Destroy Your Ears (France) + Naguals + Alex Czapla

Fresh from supporting Hull’s very own LIFE on their French dates, we present…
THIS WILL DESTROY YOUR EARS.

It might be easy to stop in front of this band’s apocalyptic name and walk on by… convinced that you’re entering a deliberately badly lit alley or already exhausted by the heavy weather forecast. However, even if this most Mancunian trio from the suburbs of Hossegor is indeed committed to the democratisation of tinnitus, it would be far too simplistic to classify them as a “too loud for Mum” band (especially if Mum likes the dancing melodies of the 80s, contemporary art, and the end-of-the-world energy of the 90s…) Formed in 2017 in the Landes region of south-west France by Magali, Quentin and Pierre-Johann, the members of This Will Destroy Your Ears, who are at once choreographers, visual artists, video makers and specialists in wall-mounted sockets, are what is now known as a DIY band. Except that in this case, this practice can’t be considered as just a trendy term, but as a true passion… everything is done by them: amps, instruments, communication, videos… they even built their own recording studio: pARPAINg.  Nestled on the ocean’s edge, surrounded by forest and horses, this project is part of an even bigger package – The KONTAINER – which includes a creative space dedicated to artists, a screen-printing workshop, a place for experimentation with the public and a whole host of profiles ranging from coders to translators, graphic designers to writers, not to mention a specialist in North Atlantic hurricane risk modelling; you can’t make this stuff up. It’s an exuberant community (where everyone works a little on each other’s projects), far from the cliché of the adrenaline-fuelled blond surfer, and which carries the seeds of a counter-culture closer to a “Berlin on the beach” than to a fantasised, and already largely has-been, Landifornia (nickname given to this region of France). For their first tour in March 2018, they decided to go to England with a 1981 Renault Master – which the locals tenderly renamed “Georges” and which would go on to become the hero of their first video – to understand, as they say, how the English went about re-inventing rock & roll over and over again. They then shared the stage with USA Nails, JOHN, Black Midi or METZ and never stopped going back and forth between their English and French audiences. In 2019, they released their first album CLEAR, recorded in one week at pARPAINg with the help of Boris Lehachoir and Dorian Verdier (keyboard player at JC SÀTAN) and mixed in London at Wayne Adams’ Bear Bite Horses Studio on Cowboy À La Mode (FR) and Brutalist Records (UK) labels.