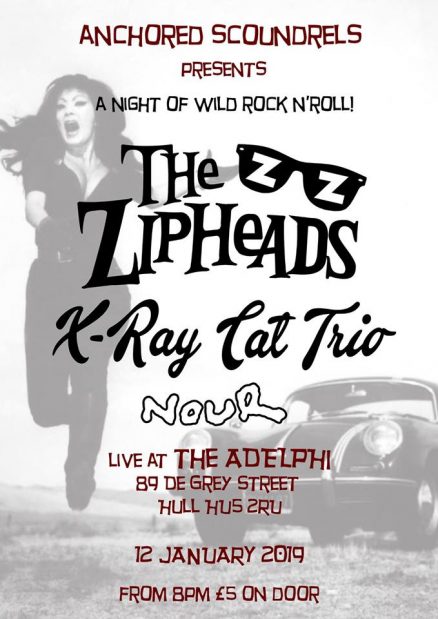 The Zipheads hail from St Albans, UK. Initially formed as a punk band around 2005, taking influence from The Clash, Stiff Little Fingers, Descendents and the like, the band members eventually became more and more enamoured with 50’s Rock’n’Roll and Rockabilly.

The band quickly found a home in the Psychobilly scene, where their punk-infused rockabilly made a lasting impression and has seen them play with legendary psychobilly bands The Meteors, Guana Batz, Demented Are Go, King Kurt, Mad Sin and many more as well as appearances at Psychobilly festivals across Spain, France, Finland, Sweden and the Netherlands.

In 2013 they released their debut album Prehistoric Beat, and 2016 saw the release of their much-anticipated second album- Z2:Rampage! on Bomber Music, to rave reviews and a spot in Vive Le Rock’s Top 50 Albums of the year.

X-Ray Cat Trio bring their double-bass madness to Hull! Based in Leeds, they take inspiration from horror B-movies and sci-fi. Describing themselves as Vampyr Surf Rock ‘N’ Roll, this lot have made a real impact on the psychobilly scene in recent years, with impressive live performances around the UK and Europe, and with quality releases on Gin House Records and Killjoy Records.

NOUR is alternative rock / punk band from Hull. Their eclectic live set encapsulates psych, shoegaze, hardcore punk, doom, and indie, alongside loud / quiet dynamics more reminiscent of ’90s rock. The band aims to evoke the spirit of their idols Hüsker Dü and Nirvana, without being merely another stale copycat. Contemporary British acts, such as Forever Cult and Basement, inspire not only a part of NOUR’s sound, but also their DIY ethic.