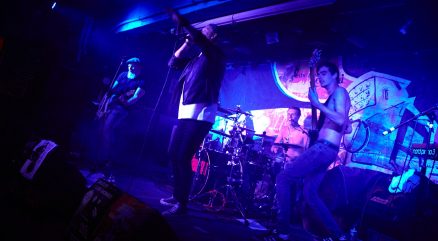 The Raywells celebrate the launch of their new Black Sun EP with support from The Lamberts and Freek.

A no nonsense crowd pleasing get yer rocks off kinda band, it’s plain to see that The Raywells love doing what they do.

The band established a loyal following in their home city first time around and gained national exposure performing sell out gigs around the UK, with regular appearances on BBC radio and TV, ITV and Sky.

However, after a successful tour of California, the four founding members took the difficult decision to put the band on hold to explore the world and do their own thing.

Returning to the local festival circuit during summer 2016 and with a successful acoustic tour supporting US singer songwriter Alan Merrill under their belt, fans will not be disappointed. The music remains original, authentic and from the heart. Each song maintains a unique identity. Energetic vocals, raw guitar driven hooks fused on to a solid backbone of bass and drums. The result – foot stomping rocking beats that elevate the soul and make you feel alive!

The Lamberts are a 5 piece alternative rock band that hail from the foreshore of Cleethorpes. They are a fresh alternative to anything that is on the scene right now, with their heavy back line, beautiful guitar riffs and a crisp sounding front man. They really are a nice break from the norm.

Freek are a duo that make sounds best described as ‘punk, heavy, bluesy and mad’

Tickets are £4 + BF via Eventbrite or £5 otd (subject to availability).