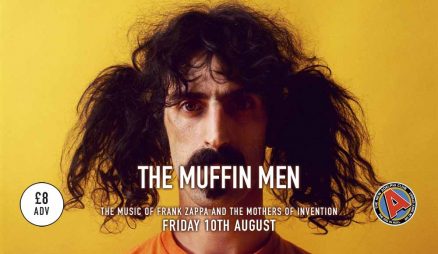 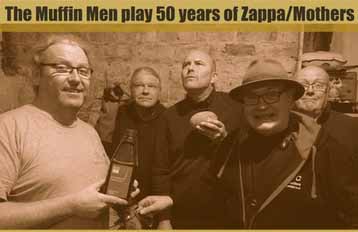 Purveying fine interpretations of Frank Zappa’s music to the most discerning of listeners for over a quarter of a century.

Back to the roots, the 5 piece Muffinz featuring original members.
Performing many of the original Mothers of Invention arrangements, along with some favourites from over the years.

DO YOU KNOW…
… that one of the oldest and most durable “tribute bands” in the music business – formed long before the term “tribute band” was coined – was formed and remains based on Merseyside?

Do you know…
… that they first performed the music of frank zappa 25 years ago at the legendary rock venue “The Black Horse and Rainbow”, Berry St, Liverpool, on the maverick composer’s 50th birthday?

Do you know…
… that since then they have played thousands of shows throughout Europe, in venues ranging from tiny bars to Liverpool Philharmonic Hall and Glastonbury world stage, and have meanwhile released over 20 cds and 4 documentary dvds?

Do you know…
… that they have worked and toured alongside many of Frank Zappa’s former band members, and that they have been referenced in several standard texts regarding Zappa’s music?

Do you know…
… that they celebrated 25 years of operation with a special 3 hour party gig at the world Famous Cavern Club on Sunday December 20th 2015, it featured 15 past and present members and played to a sell out crowd?

Do you know… the muffin men?

The Muffin Men have played over 2000 dates around Europe, often featuring ex-Zappa alumni. The band play their own arrangements of Zappa material, along with some note-for-note versions of some favourites. At least 12 ex-Zappa musicians have performed with The Muffin Men over the years:

Until his death in 2008, the band often featured guest vocals and percussion by Jimmy Carl Black, former drummer and vocalist from Zappa’s Mothers of Invention, as well as performing with Don Preston and Bunk Gardner in 1993. In 1994 they played a nine-week European tour with guest vocalist Ike Willis, and again teamed up with Willis in 2003 for a special Zappanale festival show, which also featured Napoleon Murphy Brock. Mike Keneally has also appeared with the band, along with Ray White, and Robert Martin. Denny Walley has performed on several occasions since 2010.