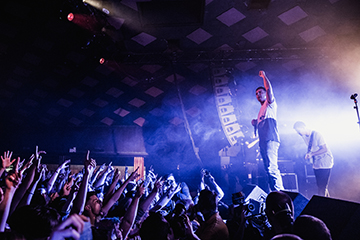 Combining portions of Hip-Hop, Pop, Rock and Electro into one melodic element of noise, welcome to the new innovative sound of The LaFontaines. Formed at the dawn of 2008 and hailing from Motherwell, the old industrial heartland of Central Scotland, The LaFontaines have already forged a dedicated local following after showcasing their energetic live set at venues such as King Tuts, Carling Academy and the Live at Loch Lomond Festival ’08. Their unique genre mash-up has gained critical acclaim from press and radio throughout Scotland and continues to spiral as the band strive to conquer new ground.

The name’s BROSNAN… Brosnan the band. Emerging in late 2016, Brosnan have been prolific in bringing their take on classic British rock and/or roll and pop culture to the local music scene. Their music centres on having a good time and harks back to an older era of guitar driven songwriting.

Most recently supporting bands including Idles and Gengahr, the band have been gigging hard across the country, receiving positive press and airplay. Brosnan’s latest EP exudes energy from the off with energetic grooves, jolting guitar riffs, bubbly bass hooks and vocals belonging in that English-accented rock camp with the likes of Pulp and The Kinks.

“No prizes for guessing this band’s favourite Bond. Surprisingly quirky indie rock ‘n’ roll that manages to keep one toe in the 1960s whilst sounding fresh and modern”. – Fred Perry Subculture

APPARITION are a psych-grunge duo from Hull, playing both fast and loud! Creating an eerie atmosphere captivating the audience through the energy provided by the echoing drums, guitar and vocals.