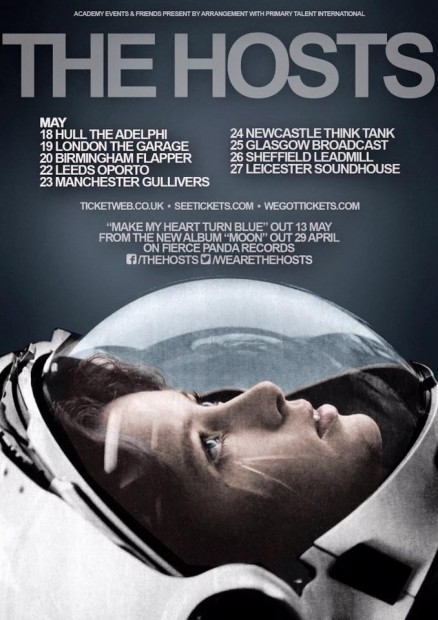 Under The Influence presents The Hosts.
£6 adv from https://www.hullboxoffice.co.uk/tickets/buy_ticket/1039

Back in February 2014, The Hosts released their début album ‘Softly, Softly’ representing the missing link between Roy Orbison and Richard Hawley and which waltzed all over the playlists of BBC 6Music and Radio 2.

Now, precisely two years later, they have announced the release of the follow-up, entitled ‘Moon’. Tidy behaviour, in every sense.

The Hosts have previously spooked the masses playing with the likes of Richard Hawley, The Walkmen, Paul Weller, Suede, Cold War Kids and Cherry Ghost (but of course).

“The Hosts’ output is redolent of Roy Orbison crooning mournfully yet manfully over mountain-high rhapsodies worthy of Spector.” – The Guardian

What People Are Saying About The Hosts:

“Demand more magic from your music. If you want nothing less than brilliance, give The Hosts a chance and they may just be the band for you.” – www.godisinthetvzine.co.uk

“‘Softly Softly’ is an album worth listening to on repeat for about a month solid before you truly realise how good it is – and once you do, you won’t be able to resist.” – hootingandhowling.com (album of the year)

“This is truly glorious stuff.” – www.roots-and-branches.com
“A lot of heart and a keen sense of glorious nostalgia.” –www.whisperinandhollerin.com

“If you have a single romantic bone in your body, this should be a required purchase for your sweetie this week.” – www.theregoesthefear.com

“For those who love someone, whether requited or not, ‘Softly Softly’ is an album to dance to, to love to, to take to your heart and cherish.” –www.forfolkssake.com

“Their warm grandeur will keep even the bitterest winter at bay.” –www.backseatmafia.com

4-piece Alt-Rock outfit from Bradford exploded onto the scene with the release of their debut single, “Don’t Waste my Time”. Championed by BBC Introducing and achieving 7 plays on BBC Radio 1.

The video of which achieved TV airplay on C4’s The Sunday Brunch.

Influenced by the likes of Biffy Clyro, Brand New and Young Guns to name a few – the 4 piece infuse drums, bass, 2 guitars, 3-way vocals, an injection of piano and orchestral backing tracks – it’s a BIG sound delivered with hair-raising performances.