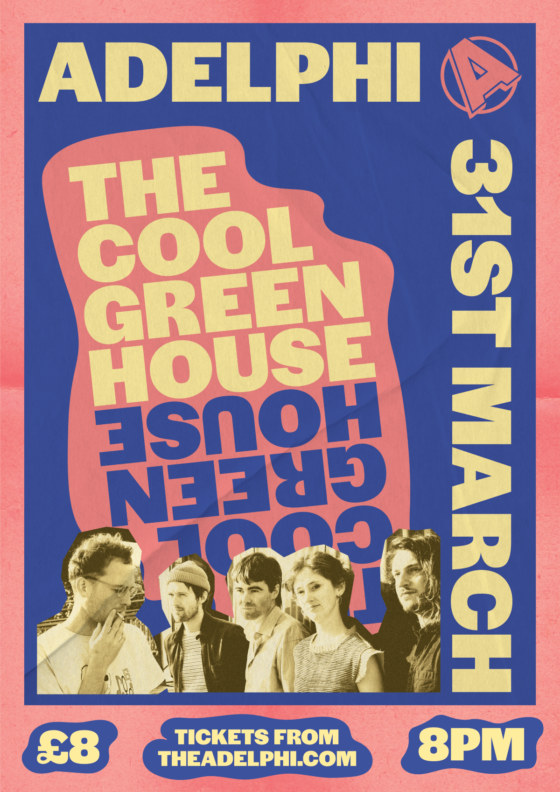 The Cool Greenhouse play hypnotic, home-brew postpunk with an almighty lyrical bite. Having caused a stir on the underground DIY label circuit in 2019, The Cool Greenhouse released a handful of celebrated 7’’s and EPs on Lumpy Records, Market Square and Drunken Sailor in past years. 2020 brought the release of their much anticipated debut studio album on Melodic Records; taking their lo-fi home-recordings and showing off a newly developed, fuller sound, lifting their signature style to previously unexplored heights. Last year the band also emerged as a full line-up, disorientating and delighting their audiences in equal measure; supporting the likes of The Stroppies, Bad Breeding and Do Nothing. Having played catch up this Summer with live shows, capacity appearances at Latitude, Greenman & Dot to Dot festival have not gone unnoticed

“The Cool Greenhouse could certainly be part of the driving force extending the frontiers of modern rock.”
Gigwise

“The Cool Greenhouse exist in diametric opposition to me and you and our stupid short attention spans.”

Global Charming are a post-punk quartet emerging from the Amsterdam underground, exorcising the banality of everyday life. On their album ‘Mediocre, brutal’, the band explore the monotony of daily routines, survival of the dullest kind; because boring is intense.

I hate band bios. Souped-up falsehoods to make you sound unique. Also, I’m not a band. It’s just me. Some guest musicians (and/or my kids) appear on the records, but mostly it’s me. I met myself in Hull, UK, in 1988 when I was born and have been together ever since. I try to make my music sound good and I hope that every track has an impact on you. Yeah, you. I want to make a connection with you. I want each song to be different to the last. I want each album to be your favourite. I’d like to dance more on stage but I’m tied down by having to sing into a microphone and play the guitar without stopping. It’s hard to do all three at once. I describe myself as “weird pop” because my mum thinks it’s weird. She doesn’t like the ones that use distortion and she describes them as “scratchy”. I’m aiming to release as many albums as possible before I die.

“One of the best and original indie hearings that you’d probably come across nowadays!”
Sound Injections