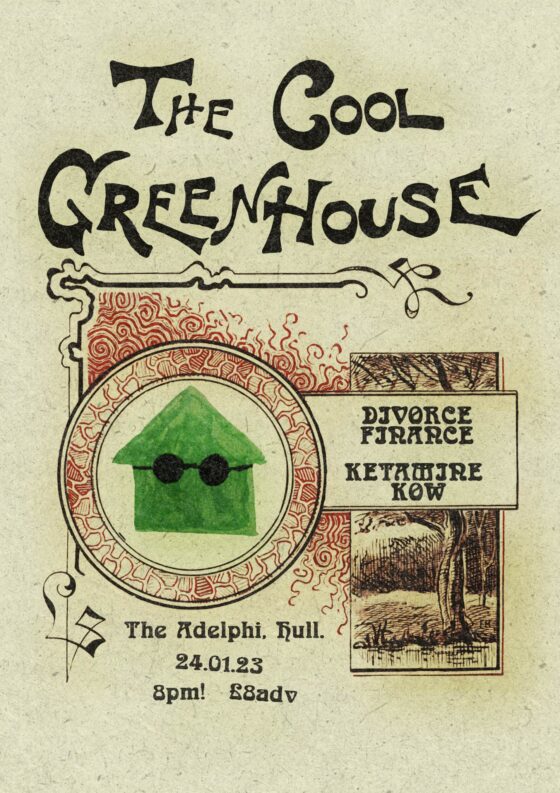 With a new album out right now, and after a top ten Adelphi show of the 2022 back in April, we welcome back the brilliant The Cool Greenhouse to the Grassroots Venue of the Year.

For fans of The Fall, Jonathan Richman, Talking Heads, The VU, Yard Act…wordsmithery and repetition.

“The Cool Greenhouse are not a band for everyone. But if you succumb to their charm, you’ll love them to death.  They’re geeky and they’re freaky. They’re odd, they’re nuts,  they’re loopy… (to the tune of the Addams Fam-il-y…) but they are head and shoulders above the perceived ‘competition’, because they were winners from the start, in that they didn’t fill in the entry form correctly, so they aren’t even in the race.”

“Tom Greenhouse is a world-away from Mark E Smith as a human being and character, even as a songwriter, but the basic elements are so akin to aforementioned, that it just somehow fulfilled a need that they have ‘organically’ become our surrogate Fall.  With a bit of Half-Man Half Biscuit, Nightingales and Bogshed thrown in maybe.” – Louder Than War

“I like albums that make me go “What the fuck?“

The Cool Greenhouse are a band who fit neatly into that category, and while you could argue that they are merely another act who speak over music, as befits a whole glut of other current groups, I would have to take issue with you and say that they are very, very different to all of them. First of all, there’s far more of a DIY ethic going on here, and secondly, there’s a kind of innocent charm in Tom Greenhouse’s lyrics, even though some of the subject matter is absolutely NOT innocent. And I kind of love that whole self-deprecating English humour that is on Sod’s Toastie in abundance.” – God Is In The TV zine