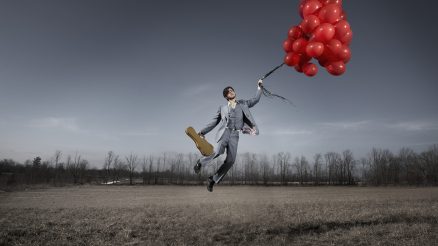 The Burning Hell is the alter-ego of Canadian songwriter Mathias Kom, and the band has been on the road in one form or another since 2007, playing everywhere from the chaos of Glastonbury to the loneliness of the Arctic Circle, popping up in bars, festival tents, living rooms, abandoned bunkers, and a mental asylum in rural France along the way. Musically, the lineup and sound of the Burning Hell has been ever-changing, running the gamut from introspective folk to hyperactive rock and roll. This means both that no two Burning Hell records sound alike, and that the band can adapt to its surroundings like a karma of anthropomorphic chameleons, taking the audience on a supermarket-cart ride through hooky, upbeat pop songs, dark ballads about pet euthanasia, and anthems for barbarians, economic conferences, and love.

In 2017, The Burning Hell is set to record and release their eighth full-length album, embarking on a tour that will take them from the Rocky Mountains to the Mountains of Mourne, across the Tyrrhenian and the Norwegian Seas, and many other places in between. Always restless, The Burning Hell looks forward to a year of new sounds, new songs, and new people to share them with.

“Canada’s The Burning Hell write the kind of literate, funny, catchy songs that makes you want to learn all the words and shout them passionately back in their faces.”
Drowned in Sound

“Not many albums open with the line ‘You were a Nazi hunter…’. It’s just one notable way in which The Burning Hell’s sixth LP (but first the the UK) proclaims its lone wolf intentions. The band is mostly the product of songwriter Mathias Kom, a mischevious, caustic people’s poet with a world view that lets you know the good guys occasionally win. Kom sings what he sees, from truculent kids and their smugly indulgent parents to corrupt corporate greed, to some things he doesn’t: Norse gods and the futility of cults. His half-spoken baritone will appeal to fans of punk vet Jonathan Richman, the music to those of pioneering alt-rockers They Might Be Giants. If that sounds a little too college-rock clever, rest assured that Kom’s music falls on the right side of the indie rails, knowing but always careful to let the listener in on the joke.”
Q Magazine