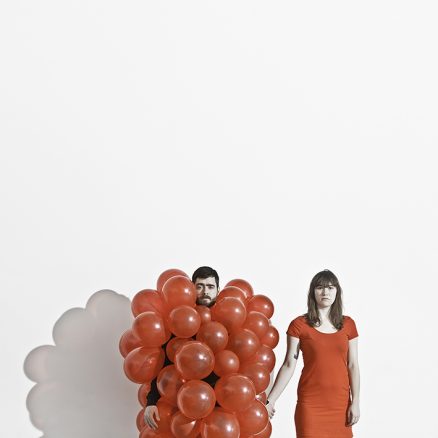 In 2007, Mathias Kom collected some of his many songs and started a band, named after a religious tract handed to him by a wide-eyed zealot in Toronto. Mathias subsequently invited all of his friends to join him in performing these songs about seagulls, shopping malls, and the similarities between love and hurricanes. They’ve played everywhere from the chaos of Glastonbury to the loneliness of the Arctic Circle, popping up in bars, festival tents, living rooms, abandoned bunkers, and a mental asylum in rural France along the way.

Musically, the lineup and sound of the Burning Hell has been ever-changing, running the gamut from introspective folk to hyperactive rock and roll. This means both that no two Burning Hell records sound alike, and that the band can adapt to its surroundings like a karma of anthropomorphic chameleons, taking the audience on a supermarket-cart ride through hooky, upbeat pop songs, dark ballads about pet euthanasia, and anthems for barbarians, economic conferences, and love.

“The band is mostly the product of songwriter Mathias Kom, a mischevious, caustic people’s poet with a world view that lets you know the good guys occasionally win. Kom sings what he sees, from truculent kids and their smugly indulgent parents to corrupt corporate greed, to some things he doesn’t: Norse gods and the futility of cults. His half-spoken baritone will appeal to fans of punk vet Jonathan Richman, the music to those of pioneering alt-rockers They Might Be Giants. If that sounds a little too college-rock clever, rest assured that Kom’s music falls on the right side of the indie rails, knowing but always careful to let the listener in on the joke.” – Q Magazine, February ’14

“Even Jesus is going to enjoy this once he finally gets here.” – Tom Robinson, BBC Introducing

Black Kes were among the nominees for best band/artist at this year’s Yorkshire Gig Guide Grassroots Awards. With songs about everything from haunted houses to gout, If Black Kes were a person they would be the bastard love child of Librace and Lonnie Donegan, kept in the attic and made to listen to old Bob Dylan LPs, watching rubbish television and classic movies. A shambling, deformed, six foot man toddler, idiot savant. Monstrously entertaining.