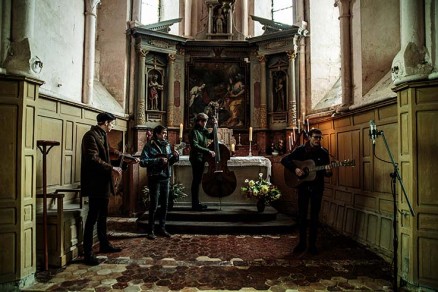 The Buffalo Skinners + The Quicksilver Kings

The Buffolo Skinners draw influence from 60’s Rock & Roll, Folk, Blues, Soul and whatever else happens to have made it’s way into their big red van recently.

They are Kieran Thorpe (Fender Rhodes), James Nicholls (Violin), Peter Seccombe (Guitar), Miles Stapleton (Drums) and Robbie Thompson (Bass). Four of them; Robbie, Peter, James & Kieran contribute songs. The different songwriting styles keep both the music and the listener on their toes, while the instrumentation and prominent use of vocal harmonies keep the sound of the songs fairly cohesive.

The Buffalo Skinners is a labour of love. Over the past six years the boys have shared highs and lows both on and away from the stage. From busking in sub-zero temperatures on a street corner in York, knowing that debts are stacking up whilst CD sales just aren’t, to sharing a meeting and a sandwich with The Game (yep), and Steve Berman at Universal Records in Los Angeles. The lows however, are just not worth it if your heart isn’t in it.
The empty pockets, empty fridges and empty pension schemes might make for great songs (I’m looking at you Jackson Browne), but in reality, those times are tough! There has to be something deeply positive, fun and
worthwhile at the very core of what you’re doing if it’s going to survive the winter.

For The Buffalo Skinners, there is, and it’s utterly visible at the live shows. Having four frontmen has resulted in there being no room on stage for ego or pretence, making the performances good fun, sincere and
engaging. The lads have made endless festival appearances in the UK (Wilderness, Radio 2 BBC Hyde Park, Boomtown, Glastonbury, Kendal Calling,
Tramlines, Camp Bestival, Deer Shed…) toured all over France, had a brief spell in the USA and have now found themselves sharing a small terraced house on the back of a Fish and Chip shop in Sheffield. They have also
found themselves in the very capable hands of the Mercury Music prize nominated producer Colin Elliot, who has both featured on and produced the band’s third album, ‘Cease Your Dreaming.’

Cease Your Dreaming is The Buffalo Skinners most accomplished record to date, being made up of 13 songs concerning love, death, work, travel, religion, and countless other irksome obligations. It also introduces two
new members. This will be Kieran Thorpe and Miles Stapleton’s debut recording with the band, both having only been in the group 7 months prior to entering Yellow Arch Studios.

with support from The Quicksilver Kings
Doors 8.00pm