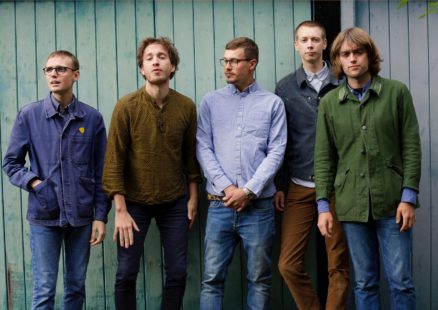 With four active and contributing songwriters in the group, The Buffalo Skinners are painting from a broad palette of influence. The result being a rare depth of musicality and creativity. You certainly won’t hear the same song twice, but you’ll unmistakably hear the same sound. A sound that exists somewhere in the time and space between T. Rex, The Smiths, The Felice Brothers and Big Thief. At the heart of the group are the voices of Peter Seccombe, Robbie Thompson and James Nicholls the three members who formed the band a decade ago.

The first page of this next chapter however is undoubtedly forthcoming single ‘Do What You Want’. Recorded to 2 inch tape with Jamie Lockhart and Rob Slater at Leeds’ Greenmount studios (The Cribs, Brawlers, The Vaccines)

Curiously enough, the studio is the proud owner of the very tape machine that recorded The Beatles in Hamburg, and listening to ‘Do What You Want’, it’s hard not to feel like some of the spirit of The Beatles in Hamburg has found its way onto this record, its energetic Rock ’n’ Roll drowning in harmonies and has a sense of urgency that is absolutely reminiscent of that period of The Beatles, whilst remaining overtly modern in sentiment.

‘Do What You Want’ is a Rock ’n’ Roll song that buoyantly champions the individual’s right to self expression.

With The Buffalo Skinner’s previous releases having earned the attention, air-play and esteem of Bob Harris, Steve Lamacq, Janice Long, Jericho Keys, Cerys Matthews, Dermot O’Leary and Paul Jones, there are high expectations for ‘Do What You Want’ and beyond.

The bar is also set pretty high for the next batch of live performances. With new songs and a new member, there is a palpable buzz in the camp at present. The Buffalo Skinners’ live shows are life affirming and inclusive. There’s an authenticity in the youthful energy of these boyhood friends from the North of England that’s irresistibly infectious and absolutely invites you to be a part of it.

The music of The Buffalo Skinners is full bodied, rich and warm, but it’s the sweetness of the two, three and four part vocal harmony pouring on top and soaking into each song that gives the band their unique sound and a well earned pitch on the map of exciting new music to be discovered in 2019. The Buffalo Skinners are working on a fourth full length album, again teaming up with Jamie Lockhart and Rob Slater at Greenmount, to be released next year.