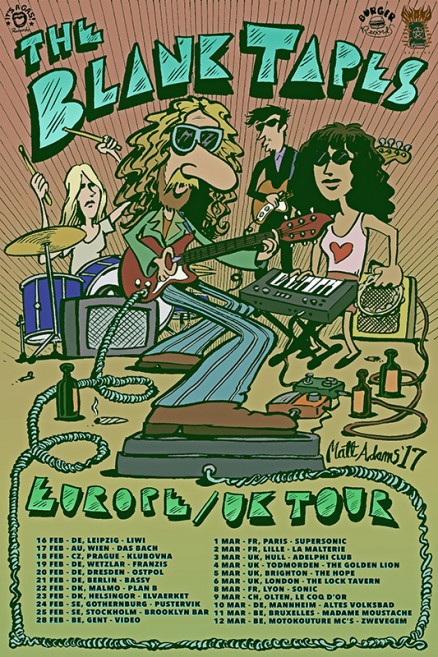 THE BLANK TAPES is the moniker of Los Angeles based multi-instrumentalist, Matt Adams, who has produced over a dozen albums of 1960’s inspired folk-rock-surf-psych-soul-pop on Volcom, Burger Records, Antenna Farm, Royal Oakie, White Noise, and others. Their next album “Ojos Rojos” comes out this April 15th in the USA, EU, & Brazil on vinyl/CD/cassette. Along with his band mates, The Blank Tapes have toured throughout America, Brazil, Europe, & Japan. Matt is also the artist behind his band’s posters & album covers.  New albums and tours coming soon…

“Evokes Belle and Sebastian, Pavement, and The Black Keys – in a San Fran coffeehouse (just like the old days).” – ROLLING STONE

The Blank Tapes is now and always has been Matt Adams, a soft-spoken kid from a Southern California suburb who learned to play practically every instrument a good garage band needs, and then started making beautifully idiosyncratic records on his trusty home eight-track because … well, why wait? When he first heard the Beatles and the Kinks, he knew he needed to make his own songs, too, and so in 2003 he did, with the kind of inspiration and confidence and personality you’d think have faded out in 1967. By the time he left his home in Orange County for San Francisco in 2005, he’d put dozens if not a hundred of his own songs on tape, all lovingly and painstakingly and perfectly recorded in a series of ever more modest bedrooms and sheds. The local press loved him and when he landed in the Bay Area, the press there loved him just as much, too. (“Somebody sign him, quick!” said Rolling Stone.)

But the funny thing is this is all the ancient history of Blank Tapes now—or maybe just the prelude. Adams is the kind of guy who writes a song just as natural and as he wakes up everyday. He’s got … maybe almost four hundred originals hovering inside his head, he says, and he remembers them all perfectly. He’s got lost albums and unreleased albums and more albums for the future planned out to the last detail. He paints his own albums covers and posters—with talent enough that he worked for Mad Magazine!—and booked all his own tours and makes the show go on whether its him and a portable amp on a lonely bridge in Austin or him and eight other rock ‘n’ roll powerhouses cracking the stage in half.

In 2010, he got not one but two surprise smash hits in Brazil, leading to his first tour outside North America. He shared bills with sci-fi garage legends Thee Oh Sees and home-taper extraordinaire R. Stevie Moore in Europe. He provided much of the soundtrack to the cult surf film ‘Stoked and Broke’ and took a stripped-down Blank Tapes to Japan to tour with the film. And he custom-wrote a special song for Burger Records Weiner Dog Benefit comp, doing his utmost to help a little puppy pay a vet bill.

Now he prepares to release his newest LP Vacation on Oakland’s Antenna Farm Records, the rightful next step after 2010’s Home Away From Home and a string of singles and cassette albums on Burger, White Noise, Dome of Doom, Curly Cassettes and 20 Sided Records. It’s the first-ever full Blank Tapes album recorded somewhere besides Adams’ trusty 8-track. Ever since the birth of the Blank Tapes, Adams has figured out the classic part of classic rock—the kind of songs that aren’t so much written as revealed. And Adams lately gets his revelations while traveling, so Vacation is an album written on the road with a little nod to the rootless spirit of the actual On The Road.

His songs are alive with style and sentiment of immortals like Ray Davies and Robyn Hitchcock (“Earring”) or Kris Kristofferson and Terry Allen (“Working,” “Vacation”) or even Lou Reed (“Pearl,” written about girlfriend and Blank Tapes drummer Pearl Charles the night he met her) and Buddy Holly (the adorable bridge of “Coast to Coast”) or even Os Mutantes on “Brazilia,” a bossa-delic song inspired by Adams’ informal park jam sessions on his Brazilian tour. With studio help from drummer Will Halsey and a series of bassists, Vacation is an everything-old-is-new-again album—a record chasing down timelessness in its own time.

Now relocated back to Los Angeles, Adams finds the music he’s loved since that first borrowed guitar is now the new sound of Southern California, thanks to standard bearers like the Growlers, Nick Waterhouse—who played the same off-the-path bars as Blank Tapes, waaaaay back when—and Burger Records, who’ve already released an earlier Blank Tapes full-length. After a year of low-key shows, he’s secured a spot with the Danny Rose booking agency and debuted what he calls the most fully realized version of the Blank Tapes yet—a lean and pristine trio with D.A. Humphrey on bass and Charles on back-to-basics Moe Tucker-style drums, with the kind of three-part harmonies the Wilson brothers used to love. There’s a new energy, he says. For the longest time the Blank Tapes has just been him, writing and recording as time and circumstance allow. But now, after almost exactly ten years and a new album and a new line-up, the Blank Tapes have finally become what he’s always wanted.