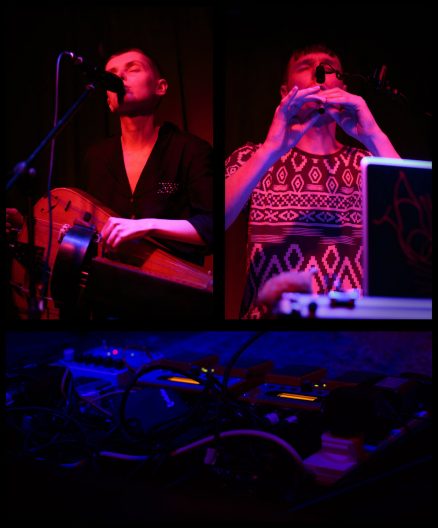 A night of cutting edge alternative electronic music featuring the techno-industrialism of tAngerinecAt, the magical sounds of The Dyr Sister and the kosmiche electronics of Azyss.

After forming in Ukraine in 2008 where they toured extensively drawing crowds of several hundred, tAngerinecAt went on to tour further afield in Russia and later Wales and UK

‘…this is some of the most powerful music I have heard in a long time, and holds a message too… difficult to believe there were only two musicians on stage.’ – LOUDER THAN WAR

“tAngerinecAt’s brought not just synth to the table, but a whole range of physical, classical instruments into the mix – most noticeably their use of the hurdy-gurdy, to make their music the deep notes of severe doom and dread that gave it the feeling of a rave in a mausoleum. tAngerinecAt know a lot about their showmanship… This band lived up to everything I’ve heard about them, and I’m excited to foray deeper into their music.” – LEFTLION

Featured on BBC 3 and BBC 6

Hailing from the City of Hull, England, Sally Currie AKA The Dyr Sister is a multi-instrumental cervine beat mistress who conjures up surreal tales with the aid of viola, synth, mandolin her voice and an array of DIY samples. Performing her catalogue of haunting, ethereal, modern day folk songs as a one-woman band she paints a fascinating canvas of sound.

Her original and innovative pieces are influenced by a wide range of genres from jungle and dubstep through trip hop and hip hop and ending somewhere deep amongst the many varieties of traditional folk music from around the world.

Expect enchanting performances from this most unique of musical artists.

Azyss is Joseph Cox. Musician and graphic designer from Hull. Having previously recorded under a variety of names and styles covering ambient drone, noise, techno and more, all culminating into Azyss, one project that flits between those genres and styles but always returning to the key influences of science fiction soundtracks and early electronic library music. Mixing drones, psychedelic synths, occasional drum machines and pulsing electronics to make electronic soundscapes.

Azyss is also a core member of the SquareWaves electronic collective, a group of electronic musicians based in Hull, who collaborate and create improvised music together.