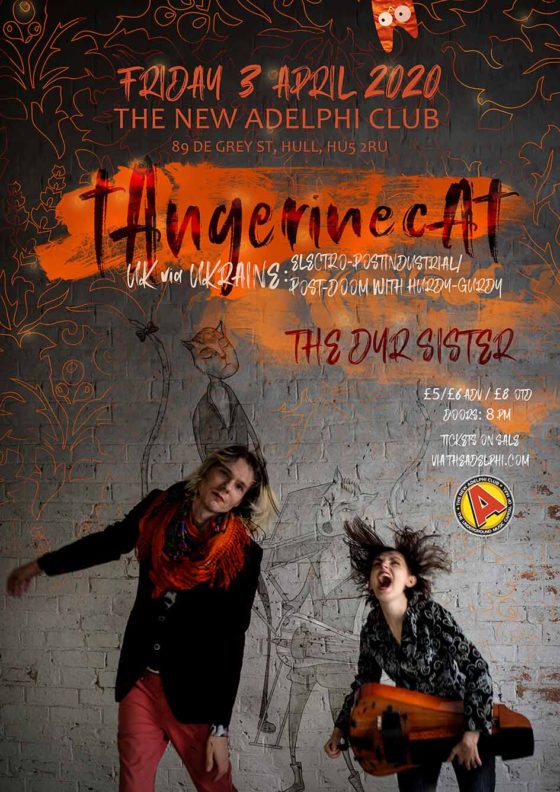 Nothing is quite like a hurdy-gurdy. The tone of the ancient instrument is a bit like that of a viola, a bit like an accordion, and more than a little like an analog synthesizer on an otherworldly setting. But while the hurdy-gurdy is associated with folk dances and medieval courts, in the hands of a master, it can make music that’s strikingly modern. Eugene Purpurovsky of tAngerinecAt is a musician like that, and the hurdy-gurdy is the hand-cranked engine that powers the duo’s remarkable sound.

tAngerinecAt matches the Ukranian-born Purpurovsky’s hurdy-gurdy, voice, provocative lyrics, and production with the sound transformation, synths, bagpipes, and ethereal whistles and recorders of musician and sound designer Paul Chilton. Originally formed in Ukraine, where Chilton lived and studied music and the band has historical and musical roots, tAngerinecAt are now based in the UK. Both artists contribute samples, ambient noises, and processed beats that evoke DIY techno, raw punk rock, and spectral folk traditions in equal measure. The resulting hybrid is music out of time: songs that could only have been made during the troubled days of the twenty-first century, but replete with echoes of ancient triumphs and tragedies.

Many Kettles, the pair’s fourth album, casts a particularly dark spell. This is electronic music with a furious human pulse: a bold dance in the face of cruel authority that evokes “the feeling of a rave in a mausoleum” as Ben Knight LeftLion put it. It’s also an outlet for Purpurovsky’s fiery statements of intent. The singer and hurdy-gurdy player has plenty to say about the parlous state of the world; “I Don’t Want To Be A White Master,” the kickoff track on the album, is a furious rejection of the rising global culture of fascism and cruelty. Through tAngerinecAt, Purpurovsky strikes back at oppression of all kinds – class, cultural, economic, ethnic, gender, and interpersonal – and invites the listener to join the resistance.

They have four independently released, successfully selling albums that have had airplay on BBC 2, BBC 3 and BBC 6. The band has toured internationally in Ukraine, UK and Russia.

“Watch out for: tAngerinecAt… this is some of the most powerful music I have heard in a long time…” – LOUDER THAN WAR

“tAngerinecAt brought not just synth to the table, but a whole range of physical, classical instruments into the mix – most noticeably their use of the hurdy-gurdy, to make their music the deep notes of severe doom and dread that gave it the feeling of a rave in a mausoleum…”- Ben Knight, LEFTLION

“Tangerinecat exploded into my world and I’m a happier man for it! Awesome energy and multidisciplinary. Myself and the team at New Art Exchange really appreciated your work.”

“I’ve never seen someone play a hurdy-gurdy so punk…”

{Dyr is Old Norse for Deer}

The Dyr Sister’s Fairy-tales for the Modern Gentleman is an ever-growing compendium of anti-ballads. An evolution into a small ensemble after a time as a solo entity was inevitable in order to continue transmitting the surreal, subversive and provocative paintings of sound that respond to the vagaries of modern life.

Combining contemporary folk with post-hiphop and electronic music genres the songs are delivered with driving percussive beats via a backdrop of strings including Viola (Sally Currie), Harp (Stephanie Halsey) and Bass Guitar (Sarah Shiels) and layered with haunting and ethereal vocal harmonies. This is a devastatingly beautiful expression of what it means to be alive and kicking and still telling tales in these bleak times.

“In the often homogenous world of underground music scenes, thank goodness for The Dyr Sister. The perfect blend of avant-garde, melodicism and out-thereness”.
– Mr Douglas Anderson – broadcaster, writer and filmmaker.

“One of the most artistically ambitious artists on our list, The Dyr Sister sounds like some wonderful collaboration between Thom Yorke and Shirley Collins. With the latter putting folk back on the map at the end of last year, there’s no better time to check out The Dyr Sister’s solo approach to performance and song-making.”
– Fred Perry Subculture – 20 Hull bands you need to hear now.

Add number of tickets required to your basket before clicking Buy Now.