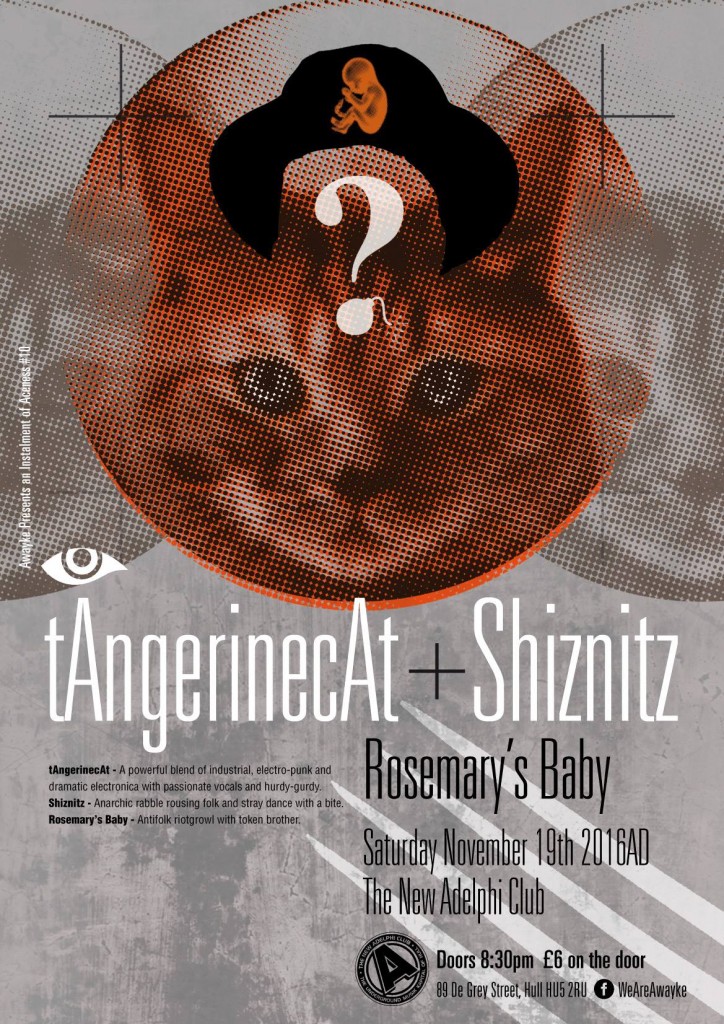 tAngerinecAt produce a really powerful blend of industrial, electro-punk and dramatic electronica with passionate vocals and hurdy-gurdy. Formed in Ukraine in 2008 tAngerinecAt have four albums to date and performed hundreds of shows all over UK and Eastern Europe.

​“This is some of the most powerful music I have heard in long time, and holds a message too. The music built in its billowing, bountiful depths: difficult to believe there were only two musicians on stage. They manage a real art; creating sound which people enjoy”. – LOUDER THAN WAR

​“Tangerinecat exploded into my world and I’m a happier man for it! Awesome energy and multidisciplinary. Myself and the team at New Art Exchange really appreciated your work”.
–  Jason Pollitt‎,   New Art Exchange (NAE)

​“They have been blazing a unique trail across the music venues of the north and beyond with their fascinating sound and overtly political/polemical music. Someone needs to snap them up quick and get them out to a wider audience.”
– Bob Osborne, German Shepherd Records

​“You were absolutely brilliant, so captivating! Comment from one of our volunteers “I couldn’t take my eyes off the stage”. Thanks so much for coming and sharing your creativity with us.” – Ladyfest Manchester

​“This is the only thing that I want to listen at this moment”. – FRESH ON THE NET

​“With such disparate influences, it’s rather difficult to pin this down to a particular genre.” – FRESH ON THE NET (Fresh Faves), The Von Pip Musical Express

​“I’ve been playing it all week and loving it. I was listening to Under the Pavement radio and they interviewed tAngerinecAt, and I was very moved actually. Every so often you hear a piece of music and it just stops you in your tracks, well by all manner with that one, with innovation, and it’s sound, and it’s lyrics, it’s just quite moving.” – REBEL ARTS / RADIO, Cambridge

​“It just blew everyone away, I was stunned in there and I was like gob smacked cos it was so atmospheric and so meaningful and they were really into it and I look forward to getting them in.” – Liz Jenkins, Presenter of The Northern Side, BCB 106.66 fm