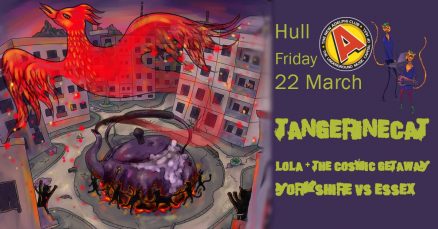 They have four independently released, successfully selling albums that have had airplay on BBC 2, BBC 3 and BBC 6. The band has toured internationally in Ukraine, UK and Russia from 2010 and since relocating to UK in 2016 have quickly gained momentum, intensively touring with headline shows all over UK.

Based on personal experience, themes of resistance are repeated throughout their new album Many Kettles, and also in the form of images and symbols that help you to survive.

☕“tAngerinecAt brought not just synth to the table, but a whole range of physical, classical instruments into the mix – most noticeably their use of the hurdy-gurdy, to make their music the deep notes of severe doom and dread that gave it the feeling of a rave in a mausoleum…”- Ben Knight, LEFTLION

☕”Watch out for: tAngerinecAt… this is some of the most powerful music I have heard in a long time…” – LOUDER THAN WAR

☕”Tangerinecat exploded into my world and I’m a happier man for it! Awesome energy and multidisciplinary. Myself and the team at New Art Exchange really appreciated your work.”
– Jason Pollitt‎, NEW ART EXCHANGE

Lola + the Cosmic Getaway are a musical duo formed by lead vocalist, Louise Connor.
Featuring ambient guitars, pulsing synths and rhythmic grooves along with Louise’s vocal comsicality, L+CG aim to submerge the listener into a world of sound bordering on the realms of familiarity based around the unfamiliar sounds of outer-space.

Debut in Hull! Formed in London in 2015 Simon Yorkshire (singer and trombonist), Chris Essex (bassist/effects monger) and Iain Hounslow (flutist/guitarist/synthist) narrative songs from fictional toymakers to Sheffield murderers…with cheeky slices of embellishment. YVE are Influenced by the likes of Robert Wyatt, Current 93, Scott Walker, Miles Davis, Nick Cave, The Residents, Bjork, Death Grips and Iannis Xenakis – without sounding much like any of them…

This event marks the official vinyl launch of their debut album, ‘Dismembered Tales’, which spins the listeners far beyond the murky Milky Way…

🖤‘One of the things that intrigued and attracted me to Yorkshire vs ESSEX was the very diverse and unexpected nature of their live set – recalling Gong and early Hawkwind, with sudden electronic dance after trombones and poetry. Great!’
– Donald Strachan from Mad Wasp Radio…

Touring in conjunction with their debut vinyl LP.