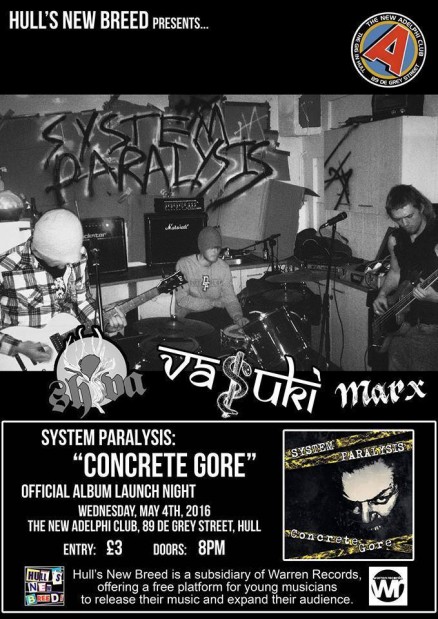 Three piece Sca/Punk/Metal band who specialise in fusing genres to deliver a fast and powerful sound.
Since forming in January 2010, the band have had the pleasure of playing with punk legends such as Random hand, The Freaks Union, Brassick, The Vibrators, English Dogs, UK SUBS and more.
Concrete Gore will be the 6th release.

Vasuki
Hard hitting grunge trio with a punk rock edge.
New to the scene but that doesn’t stop them showing what they can do.
Playing a tonne of local shows and releasing their self titled EP in October of last year. These lads play a sick set!
Not to be missed.

Shiva
Melodic heavy grunge.
Think Deftones mixed with Sound Garden – these guys will be sure to get you moving!

Marx
Taking Influences from artists like Korn and Wu Tang Clan
Marx is a talented rapper and will be opening up the show.