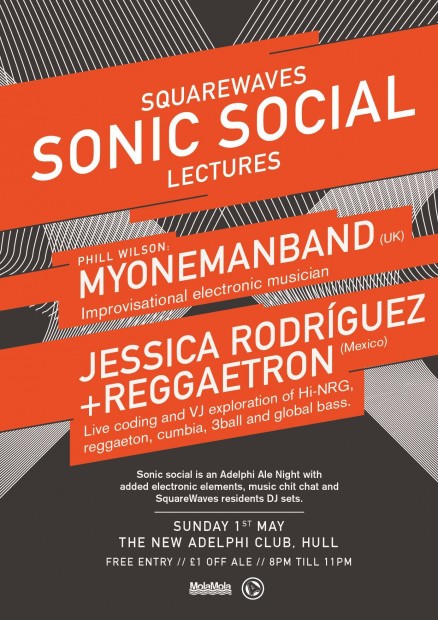 This month we’ve got two fantastic demonstrations in the form of Jessica Rodrigez + Reggaetron over from Mexico and Phill Wilson aka MyOneManBand.

Jessica /México
Currently studying a Master in Arts at the Universidad de Guanajuato. Jessica is co-founder of andamio, a collaboration platform for research, production and education around the use of analog and digital technologies in art. She is currently researching about the role of algorithmic composition as a process to produce images that can be perceive with any part of our bodies.

Emilio Ocelotl /México
Sociologist and violist. He has taken courses in the area of computer music and composition at the Multimedia Center of the National Arts Center and the Mexican Center for Music and Sonic Arts. In 2013 he awarded a scholarship to support Young Composers in the Area of the Mexican Center for Electroacoustic Music and Sonic Arts.

Luis Navarro /México
Composer and code enthusiast; he studied music composition and Performance in contemporary popular music at the Academy of Music Fermatta in Mexico City (2005-2011). He worked at the Multimedia Center Audio Department from 2010 to 2013 doing research on free software and the paradigm of Live Coding and teaching courses about free software tools for artistic creation.

MyOneManBand is the name Phill Wilson gives to his live improvisational electronica created in real-time. Created out of sounds from many instruments, often using a mixture of organic sound sets such at classical guitar, marimba, dulcimer, kalimba, accordion and drums with synthetic textures electronic percussion, beeps, bleeps and hiss.

We’ve kept the fine beers and refined company, our decks will be laden with the choicest experimental/electronic tracks, from Aphex to Zappa, and the legendary Adelphi stage will be doing what it does best – with occasional live performances, DJ sets, jam sessions and gear talks (but always with the focus on the social side).

Whether you are seeking a collaborator for your new glitch-disco concept album, hoping to catch the next electronic artist on their way to pan-dimensional superstardom, or you simply want to have a relaxing pint on a Sunday night without football on sattelite TV and the same five classic rock songs repeating on the jukebox, the Sonic Social will tick your boxes.

What’s the price of entry?
Not one single penny! You are our friend, and we love you. We just want you around. Your company is a wealth beyond measure.

Is it loud?
No, we’re going for a balance between the oscillating ambience of the world’s best electronic music and actually being able to hear people. Besides, we’ve a back room for a bit of pool & quiet, should you fancy it.

Oooooh! are you going to play Boards of Canada?
Probably

Are you that lot with all the boxes and wires and stuff?
Yes. We might show you them, too.

Is it just for nerds and weirdos?
No, normal people are especially welcome, and will enjoy themselves immensely.

…but I like guitar music…
Oh, we do LOADS of naughty things with guitars… but if you want to hear Oasis there’s several hundred pubs around town that’ll give you little else.

I’ve got an idea about a thing…
Come and tell us!

I want to know something that’s not mentioned here!
Ask away, here or via @squarewavesbot on Twitter.

I might not be able to make it
frown emoticon

Don’t be silly, of course you will.

Why is your FAQ so long?
Point taken. Thankyou for you time.