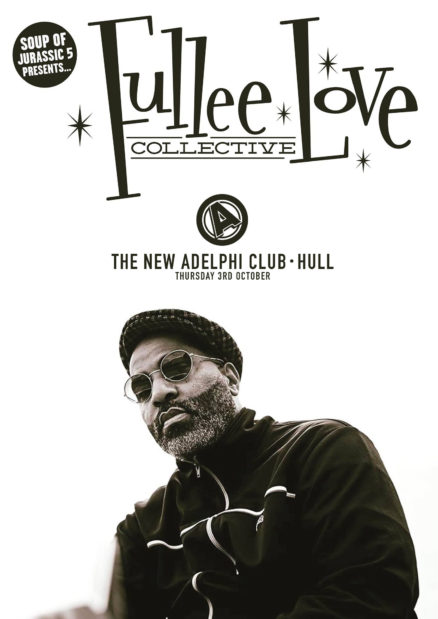 Unfortunately the Fullee Love show on 3rd October is going to be cancelled and rescheduled for Feb/March 2020. UTI

The lyrical mastermind behind Jurassic 5, Soup & his brand new project; the Fullee Love Collective. will be performing in Hull on 3rd October 2019.
Founded in October 2018, The Fullee Love Collective is an exciting new live act fronted by gold selling Hip Hop artist and founder of Jurassic 5, Soup.
Soup & band will be blasting out a set full of Funk Soul and Disco boppers with a peppering of J5’s classic hits.

Jurassic 5 are one of the most exciting Hip-Hop crews to come out of LA, pushing a slightly more alternative, laidback and fun sound than their peers on the West coast scene. The playful lyricism of frontmen Soup, Chali 2na and Akil set them apart in an age where violence was a common trope in Hip-Hop from across the US. As time went on the crew became one of the most successful rap acts of the late 90s, alongside such figures as Mos Def. And it was their live shows that really began to set them apart, DJs and producers DJ Nu-Mark and Cut Chemist proving highly accomplished at the art of live performances.

No surprise really, with tunes like “Concrete Schoolyard” or “Jayou” it becomes hard not to whip a crowd into frenzy. It’s a kind of Hip-Hop that can be easy to sing along too, and one also that promotes the kind of feel-good vibes that will always succeed at gigs or festivals. Jurassic 5 played a few unconventional places for a Hip-Hop act, and the fact they gained a multitude of new fans from this is testimony to their supremacy as a live act. For instance, they played at Lollapalooza and also the Vans Warped Tour, the latter in particular being conventionally a place for Pop-Punk or Rock acts, not Hip-Hip. It’s exemplary of Jurassic 5’s appeal – people that aren’t even fans of the genre could easily find the group’s slightly poppier, more digestible take on the genre alluring.

And anyway, for anyone that has ever seen a Jurassic 5 live show you will know that they don’t play about. Where many Hip-Hop crews are content to gallivant around the stage in front of their DJ these guys take things to the next level. Have you ever seen a turntable the same size as a two-story house? And then seen said turntable being scratched on with all the finesse of a DJ competition winner? What about a smaller turntable worn as a necklace? Again scratched on with perfect precision? It’s happened believe us. Just another thing that sets this peculiar rap crew apart from many of their contemporaries.

The group split in 2007 and, whilst they have made reunion appearances over the years since, have never been as permanent a fixture on the international Hip-Hop circuit as they once were. That being said, there have still been some standout performances – Coachella, Glastonbury and Bestival to name a few. For hard-core fans this decrease in general concerts and music releases is certainly a sad development, however, as with all bad things, there is always a good side somewhere. For Jurassic 5 it’s the freedom for each member to properly pursue various musical endeavours of their own.

Of all them Soup has gained the most plaudits for his Fullee Love Collective, an entertaining blend of Funk, Soul and Disco all underpinned by the trademark Hip-Hop style and modern Pop music sensibilities. As well as a slightly different musical emphasis than with Jurassic 5, it also showcases Soup’s versatility – both as rapper and modern soul singer. Not only this, it proves that he is equally apt at creating Funk and Soul than he is Hip-Hop. The debut album “Fullee Love: Free, White & 21” was released last year to critical acclaim, in time it certainly has the potential to be a bonafide classic.

Just listen to tracks such as “Deney Terrio” or the infectious “Nile Rodgers (Git On Down)”, they still have that quintessential feel-good Jurassic 5 bop, but with an updated emphasis on extra instrumentation and singing. The latter tune, in particular, is an archetypical 21st century Disco record – a funky bass line, silky smooth vocals and infectious guitar work… what more can you ask for? Soup’s experimentation with a different musical style definitely pays off, and one of the most important things is, despite new emphasis on singing (with a wonderful voice by the way) he never loses sights of his Hip-Hop roots. There is no denying it is, before anything else, a Pop record, but when Pop is this good what does it matter?

The Fullee Love Collective are a nostalgic throwback to an age where Pop music embodied all the best aspects of Funk and Disco. An era driven by real organic instrumentation, rather than the highly computerised sounds you here in today’s charts. It’s composition with soul and proper passion – something increasingly missing from popular music of the 21st Century. The record was produced solely by Nick Green of The Internet, him and Soup have proven to be quite the musical duo, expertly crafting an album that encompasses many different influences but never dithers in its coherency. You could forgive them for being slightly worried about its reception, especially considering Soup’s roots in Hip-Hop, but at the end of the day, who cares? You can hear that this record was made in an atmosphere of fun and freedom, if they let any of these worries creep in it would not be nearly as good.

The live show is also bound to be incredibly special, it’s not the easiest thing these days to go and watch a Disco/Funk band live in the flesh. More often than not it will be a DJ spinning tracks, a fun proposition but one that is way less special than seeing a band play the songs live on stage. Soup has recruited some of the best session musicians on the planet for the Fullee Love Collective live show ensuring it will be an experience like no other. Complete with unique dance moves and a shedload of crowd participation, it is definitely going to be a right hoot. And anyway, coming from a member of Jurassic 5 how could it not be?