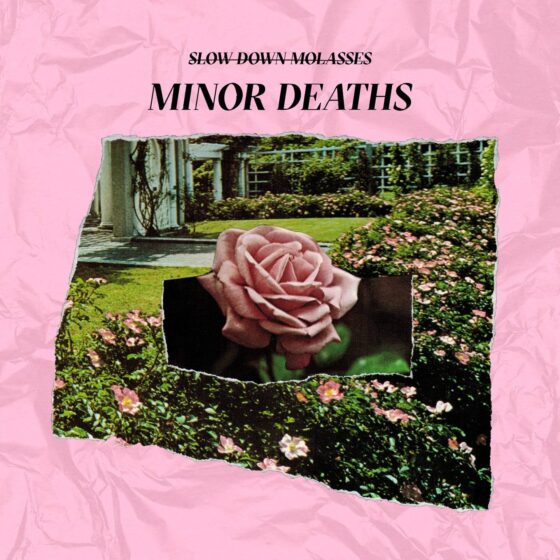 Confronting bristling anxious energy with highly-pronounced pop edges, Slow Down Molasses of Saskatoon, Sask. Canada has never been shy about traversing shifting sonic territories. In their latest iteration, the four-piece plunge deep into delay trails and feedback decay with a sound steeped in existential dread and simmering guitar rock post-punk sunshine. While their 2016 album, 100% Sunshine, forged new sounds within a group already known for constant evolution, it also saw the band develop an increasingly euphoric live performance, which saw them playing on stages worldwide. Retreating to their Saskatoon studio, ruminating on the sonic afterburn left in their wake, Slow Down Molasses are ready to emerge with a new LP – easily their most concise and devastating work yet. Released in October, 2021 Minor Deaths is a suite of eight songs that make controlled swerves into melodic indie rock landscapes while paying homage to the tightly-wound nervousness of post-punk unease. Having shared the stage with like-minded groups such as Deerhoof, Animal Collective, Swervedriver and Built to Spill, Slow Down Molasses are once again gearing up to take their explosive live show to audiences worldwide. Expect to see performances coinciding with festivals across Canada, the United Kingdom and Europe throughout 2021 and 2022.

“Slow Down Molasses have evolved from a sprawling art-pop collective into a more muscular, shoegaze-y, post-punk outfit.” ● Exclaim Magazine

“The quintet’s fantastically communal compositions have blossomed and grown in ways that are equally unexpected and consistent with their reputation for generating melodious melancholia.” ● BeatRoute Magazine

“Slow Down Molasses’ fourth LP, 100% Sunshine… is the brawniest, bandiest, most fluently, fluidly battering and, yes, best release yet to bear the band’s name.” ● Toronto Star

“Young Canadian band Slow Down Molasses blow more than a few minds with a brief but often spectacular set in a small room at the Prince Albert pub. There’s a more than passing musical resemblance to the War on Drugs in what they play, which several times also makes you think this is the kind of sound Toy might be after, achieved with half the grooming and a lot less hair flicking” – Allan Jones, Uncut

It’s been too long since we had the one of a kind Mr Sneaks play a show at our lovely venue. Expect the unexpected.