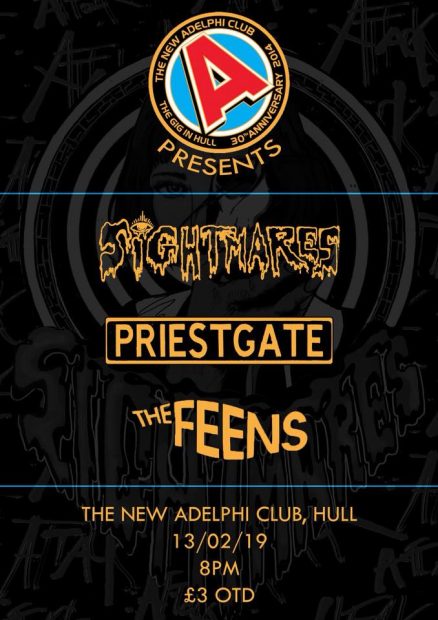 Sightmares are returning to hull for their first gig of 2019 and headline slot at The New Adelphi Club, with special support from neighbour bands Priestgate and The Feens.

Sightmares:
Forming Sightmares mid 2018; Bryn (bass/vocals), Hugo (guitar) and Ryan (drums)’s sole focus has been writing and performing down-to-earth music.
Raised from Driffield and Brigg, they’ve made names for themselves as local musicians in previous bands over recent years, collectively having supported the likes of; The Hoosiers, Toploader, Pigeon Detectives and Scouting For Girls.
Having released their recent debut & self titled EP alongside a repertoire of original tracks for the collectively disillusioned – their message is simple, ‘Rock and Fucking Roll.’

Priestgate:
Forming in April of 2018, Priestgate soon made a name for themselves with their own brand of warm jangly indie and infamous live shows. Releasing there debut single ‘Skism’ in early October in great response been featured on BBC Humberside, shortly after in novemeber they made there first ‘this feeling’ appearance. this young band certainly have a lot more to offer