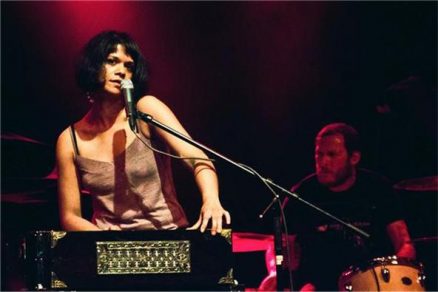 From New York City
Shilpa Ray is a quintessential lower-east-side New Yorker punk-blues-rock shouter in the tradition of Patti Smith, Iggy Pop, and Richard Hell. She’s an astute, jaded, straight shooter, small framed Bengali girl playing the harmonium, fronting a formidable groovy dark blues band who can howl sharp sardonic witticisms with the best of them and terrify and command any room into submission. Truly a force of nature on stage.
In 2013 Shilpa Ray toured arenas throughout the UK and Europe as a backing singer and support act with Nick Cave and the Bad Seeds and released her first solo EP It’s All Self Fellatio on his Bad Seed Records to high praise.
Shilpa Ray’s latest record, Door Girl, to be released on 22 September on Northern Spy Records, takes as its titular inspiration her time working the door at Lower East Side / New York City bar Pianos, its reputation one of hard-scrabble survival and the inspiration of desperation. We think it’s one of best damn rock n’ roll records we’ve heard in a long time.

The album’s first single, “EMT Police and the Fire Department,” is out now.