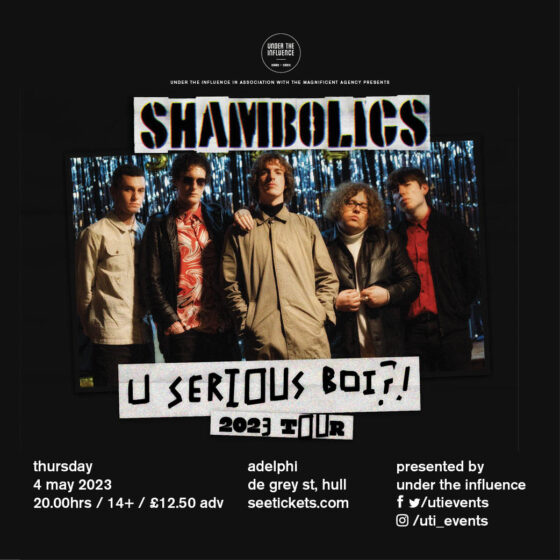 Under the Influence presents…
Shambolics + Support

Scottish sensations – SHAMBOLICS – are back with the courageous new single “Living In The Shadows”, and have confirmed details of a new EP: ‘U Serious Boi?!’  (due 14 April 2023).

A gentle guitar ballad that erupts into an uplifting acoustic anthem by its close, “Living In Shadows” glistens like a reassuring ray of light at the end of the seemingly endless tunnel of mental health struggles.

Arriving as the band announce their signing to Manchester-based tastemaker label Scruff of the Neck Records, vocalist Darren Forbes explains of the new track:

“”Living In Shadows” is a song of optimism. It’s a song of hope for anyone going through a dark time. After seeing friends struggle badly with mental health and having gone through a few bad patches in our own lives, we wanted to write a song that was a reminder to people that darkness is only temporary and that there’s always light at the end of the tunnel.”

With tender vocals and shimmering guitar strums, the new track seeks to raise awareness for the mental health struggles many face around this time of year — putting a spotlight on real-world issues while refusing to compromise on their usual charismatic charm.

Following on from earlier singles “What’s Going On In Your Head” and “Like A Breeze”, the track is the third single to be taken from Shambolics new EP ‘U Serious Boi?!’. Produced by Chris Marshall at 7 West Studios, Glasgow, it’s a dynamic and diverse extended release that sees Shambolics traverse both style and sound — from razor-sharp rock to danceable moments of pop and sleek cuts of retro-tinted indie. The EP is set for release on 14 April 2023 on the Scruff of the Neck imprint.

Hailing from Fife but having recently relocated to the bustle of Glasgow, Shambolics have made a name for themselves on the Scottish scene and beyond with their infamous live performances and impressive knack for a hook-laden single.

Making waves with key tastemakers, the band have attracted extensive radio support from the likes of BBC 6 Music, BBC Radio Scotland, Radio X, Talk Sport and more, whilst receiving praise from tastemakers including Clash, Gigwise, Tenement TV, Louder Than War and many more.

Having played countless major festivals across the UK including TRNSMT, Stockton Calling and Sound City, while also supporting Richard Ashcroft (The Verve), The View, and Embrace; the band have a reputation for a transcendental live show.

“We love experimenting and being creative in the studio,” Darren adds. “But that’s only half the story for us. Our shows are a collective experience, so if a song gets people going mad at a gig then we’ve got a winner.”

Playing a homecoming gig at PJ Molloys in Fife in December, which raised over £700 for Kirkcaldy Foodbank, the band are now gearing up for what promises to be another SOLD OUT show in their new stomping ground of Glasgow this April – details below. Further UK live dates are to be announced in due course.