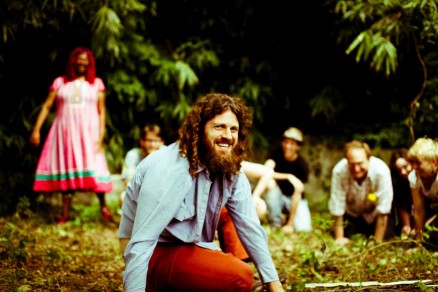 Multibird is the brand new project by Seth Faergolzia. Seth is well known for subtly harmonic, experimental lyricism, dynamic song structures, and whip-crack-acrobatic vocals. Celebrated as a vibrant example of what happens when a musician turns a genre like folk upside down and inside out, over time Faergolzia has come to represent something of a genre unto himself oft times nowhere near the folk aesthetic.

With a body of work that exceeds 20 albums and appearances in over 20 countries with the likes of The YeahYeahYeahs, Dan Deacon, Animal Collective, Regina Spektor, Jeffrey Lewis, Moldy Peaches and more.

Seth plays acoustic guitar and sings. Shaun Jones from Heck Yup, will be gently shredding electric guitar. Beat professor, drummer extraordinaire, Dominic Marini was along for the Faergolzia tour last year and has become a mainstay of Seth’s projects. Stan Martinelli, the youngest member of Seth’s project 23 Psaegz is holding down the bass.
The freak-folk group will be performing a full and varied cross-section of the peerless oddball music that has delighted and baffled audiences, collaborators, and critics alike for over 2 decades. Faergolzia will continue to shake musical conventions, making moments honest and organic in their exploration of possibility.
“Phenomenal live.” – NME“Kind and Scary.” – Spex

“Frantic fever-dream folk slashed through with rock stabs.” – The Onion

“As giddy and inventive as it is pissed off, it’s the 21st-century equivalent of the Fugs at their finest.” – Village Voice

“I have never heard anything like this before or since.” – Pop Matters

“This is folk rock twisted and distorted into compelling new structures.” – Relix

“They took that saucepan and spoon and wrote a textured and intense opera… 9 of 10.” – Vice

“Seth Faergolzia could be the poster boy for anti-folk.” — Stylus

“Speaking in tongues on top of complex musical phrases, the inspiring frontman of Dufus makes music like nobody else.  Often impenetrable and uniquely original, his rightful place is beside Captain Beefheart and Zappa.”  –Adam Green, the Moldy Peaches

“Hoping all is well with you… I’m super excited to announce that I’ll be touring the UK this summer with my stellar 4 piece band, Seth Faergolzia’s Multibird.  The last couple of tours I’ve done in the UK have been just solo or with a duo supporting Jeffrey Lewis, so I’m really pumped up about coming over with a solid band.  We will have drums, bass, electric guitar and myself as usual on acoustic guitar and vocals.  We are planning on coming to the UK July 11-20 and would really love to book something with you.  Any info you’d need regarding my music over the past 20 years is available on my website www.faergolzia.com

with support from Bunkerpop. Doors 8.00pm.