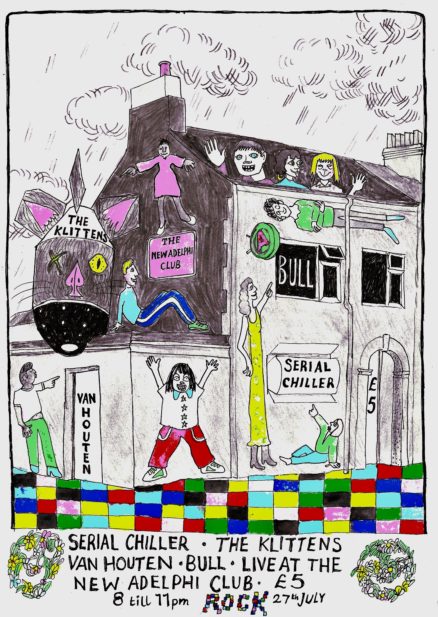 A great gig at the fabulous New Adelphi Club, come along lovely Hulldonians.

You’ll also be able to see them on the Strummerville Stage at The Humber Street Sesh, dig them here first, on this great bill and get pumped.

The Klittens
The Klittens are coming all the way from Amsterdam, Holland and this is their first trip to the UK. They’ve been a band for a short while but have already played amongst Amsterdam and The Netherlands finest bands (in which they are included) and their impressively diverse and hit laden set sets them apart from many bands. Catch them while you can in the UK.

Here’s a video of them performing in Amsterdam (see also Serial Chiller’s video filmed on the same night). The Klittens will be releasing some more hook and fuzz heavy songs soon, in the meantime, come along to The Adelphi and check this out – https://www.youtube.com/watch?v=KZlM4E7oGmQ

Van Houten
After seeing this band at The Polar Bear supporting The bdrmm, Serial Chiller and I were very pleased to book them to come back to Hull. The band describes their sound as ‘pyschadelic pop with a cherry on top’. I would describe them as ‘music to ballroom dance to’.

Unfortunately Bull can no longer play this gig as a full band but Bull’s handsome singer Tom Beer will open up with a short candle lit set.