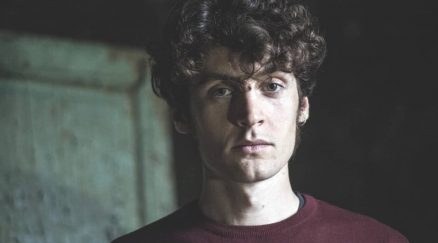 Although now based in Sicily, Italy, folk singer Sergio Beercock was born in Kingston upon Hull in England to a Sicilian mother and a British father and moved to Italy when he was still a child. His name will hopefully grow in familiarity with UK audiences as he prepares for his debut tour here at Wood Festival, for The Nest Collective in London and in Oxford, Liverpool and Hull in May 2017 (details below).

His debut album, Wollow, has already received widespread acclaim in Italy and after watching his video for lead-single Battle for Attention, I’m prepared to wager he’ll get an equally appealing reception here in the UK. The video was created by filmmakers Fabio Leone and Antonella Barbera, co-directed by Sergio.

Alongside his musical career, Sergio is also an acclaimed theatre writer and actor, and his background in theatrics has certainly had a profound influence on the composition of the album, and his enchanting live performances. The album was composed and recorded during breaks from theatre tours, and is a metaphorical journey through the places, sounds and colours that have most influenced Beercock; the Yorkshire villages where he was born, the Sicilian farmhouses where he grew up, the echoes of the South American Andes he discovered as a teenager, and the big city suburbs and their countless unheard stories. As someone who is bilingual, Sergio explains, “the choice to sing in English and not in Italian comes from the fact that basically all of the music I listened to at home when I was little was in English. Italian in my life has always been the language of society and literature, the language I spoke outside, to people every day”.

References and influences for the album include the greats of folk such as Tim Buckley and Nina Simone as well as modern day innovators like Sufjan Stevens and Devendra Banhart. Musically the album moves between minimal folk gems like Reason, Pennies or Battle For Attention, which are set in contrast with songs more directly connected to British folk such as The Barley And The Rye and Century. Wollow also features the more atmospheric tunes Naked and Beauty Of Dirt and the South American influenced An Exaggerated Song and Jester. The album climaxes in suitably dramatic fashion with an a cappella rendition of the Spanish language song Silencio, an original composition by Argentine singer Pedro Aznar.

Sergio played almost all the instruments on Wollow. During the course of the album recording, he developed the songs from simple singer-songwriter arrangements to include charango, piano, Bolivian flute, synth, percussion of all kinds (including parts of his own body) and a variety of guitar tracks.

Wollow was recorded at the new Indigo Music studios in Palermo, Sicily. The studio is fast becoming one of the most sought after music studios in Italy and was founded by the 800A Records collective along with a group of music professionals in Palermo.