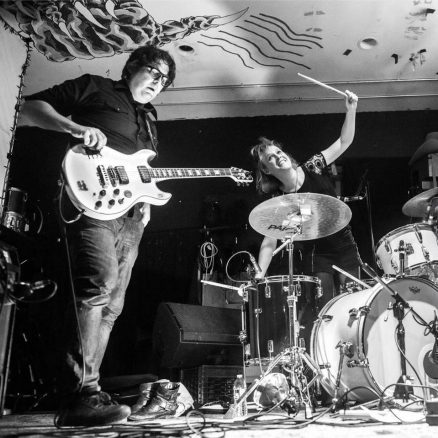 Born in New York City based in Shawnee, Kansas.

Matt has been a major (pardon the pun) contributor to the New York anti-folk scene, through his recording studio, record label and online record shop Olive Juice Music. He has worked with, as collaborator, producer, andor distributor, Jeffrey Lewis, The Moldy Peaches, Toby Goodshank, Kimya Dawson, Adam Green and many, many more.

Schwervon! have been described as Antifolk, Minimalist Rock, Noise Pop, DIY, and even 90’s Indie Revivalist. Their longish career spans five albums and three seven inches. Schwervon! are a perpetual experiment between a drumset, a guitar, a couple and a song. But a particular reaction to their music has remained consistent, as David Gedge of The Wedding Present so eloquently put it: “I’m not sure how just two people manage to make such a big sound!”

“…takes the listener on a delightful journey onto the other side of pop, a place where creation and contagion can continue to peacefully co-exist.” – God Is In the TV

“Schwervon! is that band you fall in love with without realizing you have. A noise-rock duo with the thrash of Sonic Youth, coupled with the down-to-earth tales of love in the real world like Yo La Tengo.” – Deli MagazineIssue 30

“Like the White Stripes if they’d been raised on the records of 80s indie heroes
The Wedding Present rather than Blind Willie McTell .” – NME

The record was released in the US and UK on September 22nd in collaboration with Sea Records. Blood Eagle has already been played on Mark Riley’s BBC6 Radio Show. This 7″ as well as the last full length album, entitled Courage, was recorded in Memphis, Tennessee with Doug Easley (Cat Power, Pavement, Breeders). Guest artists on Courage include Frances McKee (The Vaselines, Sunny Moon) and Dave Shouse (Grifters, Those Bastard Souls).