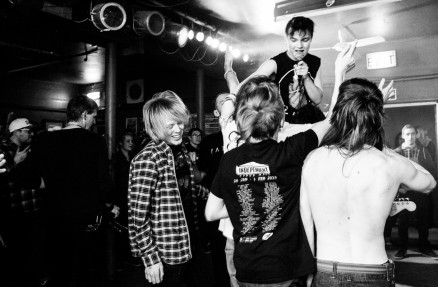 Warren Records showcase with
RUNoffthestatic, Chambers and Serial Chiller.
Pay what you want on the door.

RUNoffthestatic
We are RUN, a four-headed dragon masquerading as a four piece punk band from grey-cloud-covered Hull. So called as people would run and fall into our spores of sound, like tiny black holes which ensare our victims into a submission of pure white noise. We then retired from that business to play catchy pop songs and be herald as heroes from our hometown, by destroying the evil warlock Zgthyfr, who has been casting rainy spells over our beloved for thousands of years. We now finally have the gear and the tools to defeat him and will be heading to a town near you to rid it of his evil presence with our music.We shall bring joy to this land once more.
Chambers
Taking on board the raw grit of Nirvana, the infectious groove of Royal Blood and the darkly stylings of Slipknot, Chambers were brought together by a mutual love of Grunge and horror, where they incorporate heavy and hefty riffs alongside raucous rhythms, with a lyrically powerful message. The band release their blistering new single Disappear, backed by the B-side Love Song, on Friday 5th August via Warren Records.
Serial Chiller
Serial Chiller have a DIY attitude that resonates through the pencil-scratched, paint-splatted artwork, through to the no-shit songwriting. If you doused Pavement and Parquet Courts in paint stripper peel away the remains, you’d find something a little like these guys. With short catchy riffs and cutting lyrics, Serial Chiller have created their own brand of slacker punk
Doors 8 pm
Pay what you want on the door, support the label and great music
This website uses cookies to improve user experience. Please confirm that you accept the use of cookies. More information can be found in our cookies policy. Find out more.