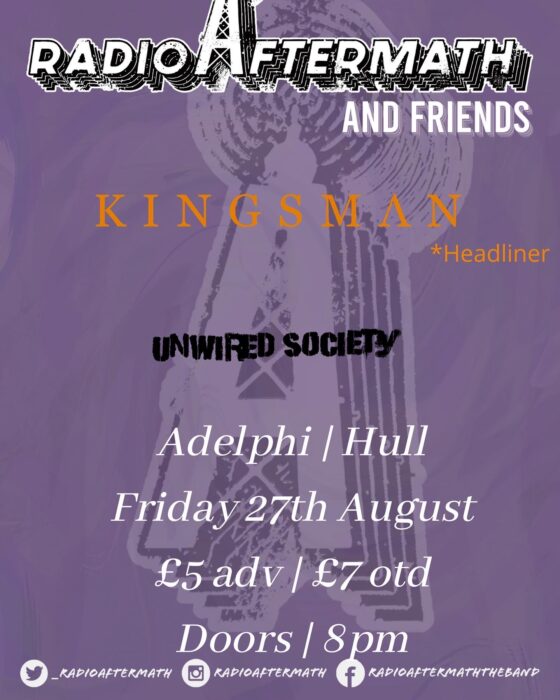 Radio Aftermath
Radio Aftermath From humble beginnings thrashing out skate and pop-punk all over the Leeds gig scene, Radio Aftermath are now broadening their horizons and discovering their ambitions. Expanding on these early influences the band now boasts passionate alternative rock hooks and enticing musical left turns inspired by post-hardcore, noise rock, and math rock bands in their repetoire. Their debut single ‘Kiss From A Rebel’ was released in May 2020 and a follow-up ‘We Eat The Buffalo’ followed in November. The band have also been busying themselves during lockdown releasing short spoken word pieces on their Youtube channel, under the banner of The Atomic Age’. An EP is currently being written, with a view to record and release later in the year. FFO: Queens Of The Stone Age, mewithoutyou, Jamie Lenman, Reuben, Biffy Clyro, Foo Fighters

Kingsman
Kingsman is a 5 piece alt-rock band that came together from the far reaches of Australia, London and East Yorkshire over a love of anything loud, distorted and melodic. Made up of guitarists Tom Cawood and Rich Walker, drummer Garth Lee Vickers, vocalist Owen Jacob and bassist Danny Flynn, Kingsman have been together since 2018.
Drawing influence from a number of genres including rock, alt-rock, metal, post hardcore and punk rock, Kingsman have just released their new EP ‘Hold Me Under.’ Recorded with Bob Cooper (WSTR, CultDreams) at the Chairworks in Castleford in the winter of 2019/20, the EP’s three songs are full of thick riffs and drum beats heavier than the core of a dead star.
Unwired Society
Formed in 2018, Unwired Society was started and then reinvented in 2020 and now consists of Dylan, Lydia and Max. The band takes a DIY approach and have had guidance from friends of other bands. Frontman Dylan cites Lydia Palmeira (LIFE), Sam Sanders (Serial Chiller), Casey Stead and Ian Bolton (Freedom Road Creative Arts) as people that have helped him be able to take the band further than what it initially was at the time. He also heavily credits band members Lydia Sioux and Max James for helping bring the band back to life and completing the lineup permanently.
This website uses cookies to improve user experience. Please confirm that you accept the use of cookies. More information can be found in our cookies policy. Find out more.