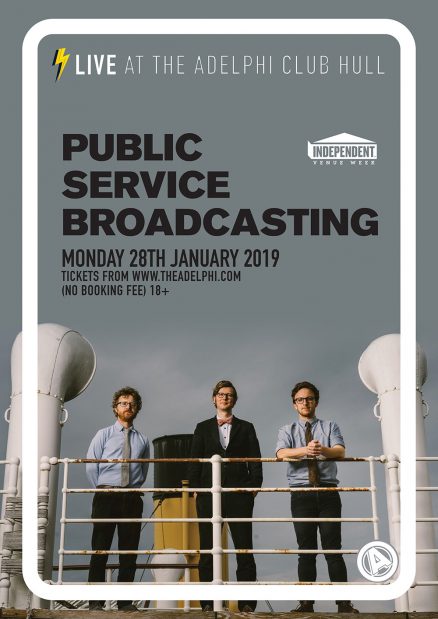 This very special show is part of a national event, Independent Venue Week 2019.
Tickets for this event have SOLD OUT.

Public Service Broadcasting is the corduroy-clad brainchild of London-based J. Willgoose, Esq. who, along with drumming companion Wrigglesworth and multi instrumentalist JFAbraham, is on a quest to inform, educate and entertain audiences around the globe.

PSB’s uniquely spell-binding live AV transmissions see them weave samples from old public information films, archive footage and propaganda material around live drums, guitar, banjo and electronics as they teach the lessons of the past through the music of the future – beaming our past back at us through vintage tv sets and state of the art modern video projection devices.

Public Service Broadcasting have announced news of their brand new EP ‘White Star Liner’ to be released digitally and on CD 26th October 2019 and on vinyl 7th December via Play It Again Sam.

The tracks were first performed earlier in the year at the BBC’s Biggest Weekend event, which saw the band debut the new material on the slipways on which the Titanic was built.

The EP tells the story of the construction of the ship and its early, tragic, demise. The band focus on the perspectives of those who built and sailed her, whilst showing their own talent for using a mixture of music and archive audio footage to provide a new perspective on well-known events.

Willgoose, Esq. of Public Service Broadcasting says: “I thought it was an interesting challenge to tell the story of the ship’s construction as part of Belfast’s proud industrial history, the spirit of optimism of the pre-war age that she represented, and then an abstract and, I hope, respectful depiction of both the sinking of the ship (represented by the repeated Morse code distress call, C – Q – D) and the discovery of the wreck in 1985.”

The opening two tracks, ‘The Unsinkable Ship’ and ‘White Star Liner’, carry the EP forward with a motorik energy, carefully tracing the construction and launch of the ship. As the EP reaches its close, the music shifts into a more volatile state on the powerful ‘C – Q – D’ – the Morse code call sign for “All stations: distress” – before closing on the reflective ambience of ‘The Deep’, an adaptation of Archibald Joyce’s ‘Songe d’automne’, the piece of music which noted Titanic historian Walter Lord concluded was probably the last to be played as the ship sank. Coupled with the impassioned voice of survivor Eva Hart, it’s a moving end to the EP, one that is a fitting tribute to those who built the ship and those who perished upon its demise.

Public Service Broadcasting also recently announced their final UK show of 2018 would be at the prestigious Royal Albert Hall on 1 November followed by a 5 week European tour. The Royal Albert Hall show sold out in a matter of hours and is the culmination of a hugely successful period for the band following the release of the #4 charting album ‘Every Valley’ and a summer of major festival slots including Primavera Sound, Bluedot, All Points East and others. Before PSB drop anchor at the Royal Albert Hall they’ll be performing a small run of dates across Wales at the end of October, returning to where they recorded Every Valley in 2017.

In a truly fantastic statement of support for small grassroots music venues across the country and as part of Independent Venue Week, PSB have announced they are to play two special shows at The Adelphi Club, Hull (28.01.19) and The Trades, Hebden Bridge (29.01.19) – Sold Out.

On October 1st 2018 The Adelphi Club in Hull celebrated 34 years as a small live music venue. A steadfast member of the underground venue tour since 1984, the venue, alongside it’s brother and sister venues dotted around the UK, has provided a platform for the careers of bands such as Radiohead, Stone Roses, Pulp, Primal Scream, Oasis, The Housemartins, Green Day, Pavement, The Manics, Mumford and Sons, Idles, My Bloody Valentine to name just a few.

On a local level the club has particular cultural significance in the lives of many thousands who have been inspired to play or engage with the community venue. Not every band ascends the ladder to fame and fortune but there is a great deal of fun, friendship and frolicking shared in the years of trying. Friendships are formed which last a lifetime.

Small venues such as the Adelphi have proved significant cultural breeding grounds and haunts for artists, designers, poets, actors and comedians. The very make-up of a venue environment with small audiences inhabited by the next generation of young intelligent politically aware creatives invites a challenge to the current trends, styles and dominant attitudes. The environment affords them the opportunity to try new things, a testing ground and to hone their trade. It can be argued that, alongside art schools, these places are a catalyst for the creation and development of original ideas.

The wonderfully eccentric and charismatic owner, Paul Jackson, has fought nail and tooth to keep the venue’s head above water in recent years. Sadly many similar venues have since closed. Many of the pressures on small venues are artificially generated. Toilet tour venues receive no external funding from the Arts Council, local government or other bodies, yet make a hugely significant cultural contribution.

The Adelphi Club was thrilled and proud to have been awarded Small Venue of the Year Yorkshire 2018. Voted for by the people and against tough opposition at The Grassroots Music Awards. A testimony to all the hard work behind the scenes to keep the good ship Adelphi afloat. The Large Venue award was won by Pocklington Arts Centre. The Brudenell, Leadmill, The Trades and many others were shortlisted.

Also this year, The Adelphi became a CIC, community interest company. The club is now a not-for-profit community focused venue with Paul Jackson still at the helm alongside volunteer directors. The CIC has welcomed Paul Heaton and Jarvis Cocker as patrons of The Adelphi Club.

Public Service Broadcasting Tickets
eTickets are on sale through The Adelphi Online Box Office – below.
*The Adelphi does not charge a booking fee.
The Adelphi Manager is Mat 07756 992723

Tickets are £24.00 each.
Tickets are strictly limited to two per customer.
Add the number of tickets you require (maximum 2) before clicking Buy Now >>>
* If you add more than two tickets your order will be refunded.

The Rules: Tickets are non-transferable – not for re-sale.
Only the registered purchaser can use the ticket.
Photo I.D. may be requested on entry. No touted tickets – Entry will be refused.